For the first time since 2019, the Special Operations Forces Industry Conference, better known as SOFIC, made its return to Tampa last week from 16-20 MAY!

Due to COVID19, this staple of Special Ops events has only been held virtually for the past two years, so the SOF community welcomed it back in-person with open arms. It was apparent throughout the week that the ability to network and engage in person had been sorely missed–reunions, catch-ups, and meetings were occurring in nearly every nook and cranny of Tampa.

Social media has been littered with members of our network sharing their photos and updates from the week, so we at Global SOF wanted to share what we did and learned as a team.

As has been our tradition since our inception (minus that pesky 2020 year), Global SOF kicked off the Monday of SOFIC week with our Anniversary celebration. The location has changed over the years, from the Tampa Bay History Center to Port Tampa Bay to our new home at Armature Works, but the intent is always the same–to celebrate the Members and Partners who have helped us turn another year older! 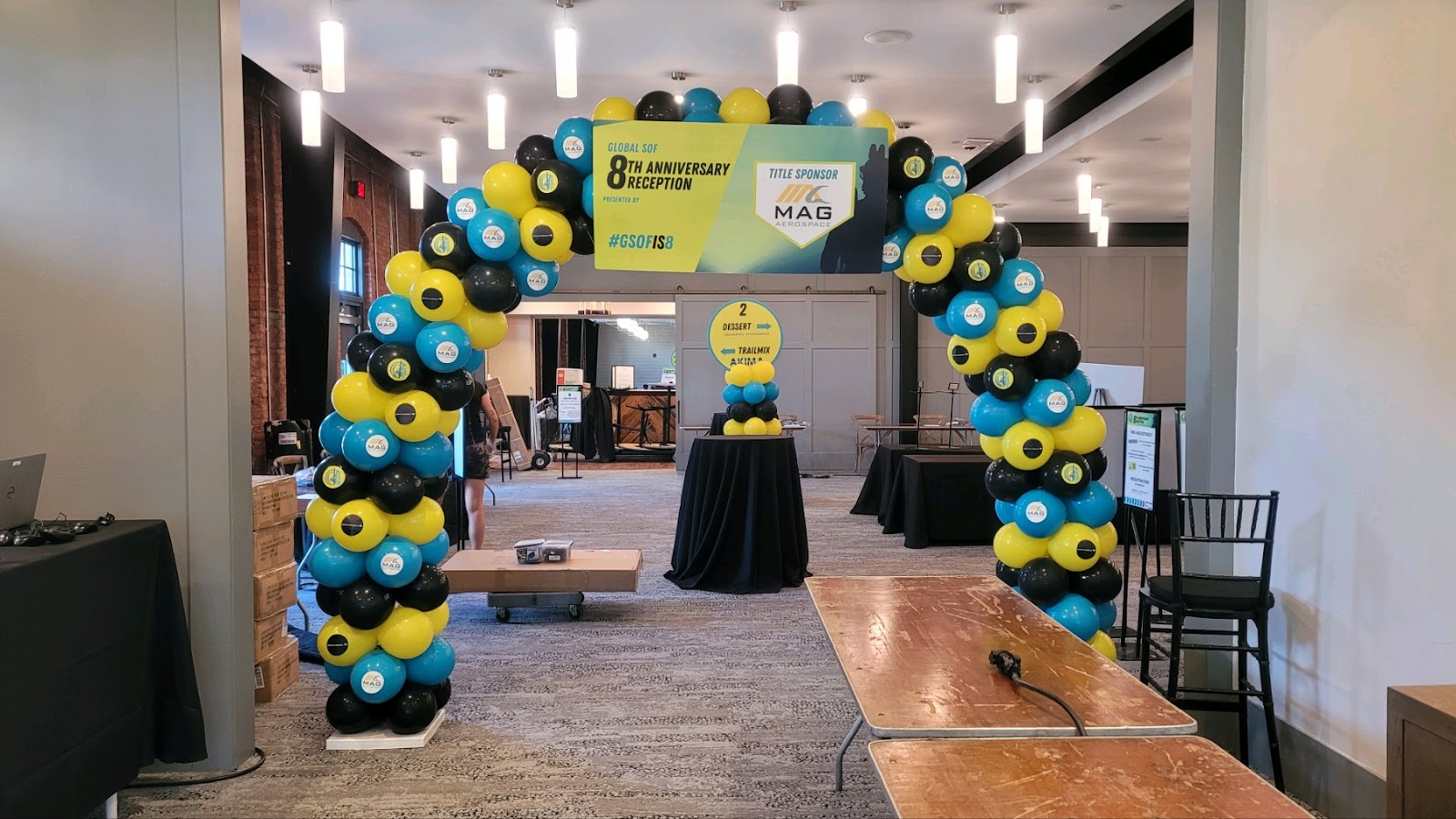 This year’s celebration marked the 8th Anniversary of Global SOF and it was our biggest event yet! This is the first time in the Foundation’s history that we fully sold out an event. Like, we tried to quit promoting it because too many people were pre-registered. We almost passed the 1,200 people mark at a venue with a capacity for 1,000 people. You don’t have to be a mathtologist to see that problem! 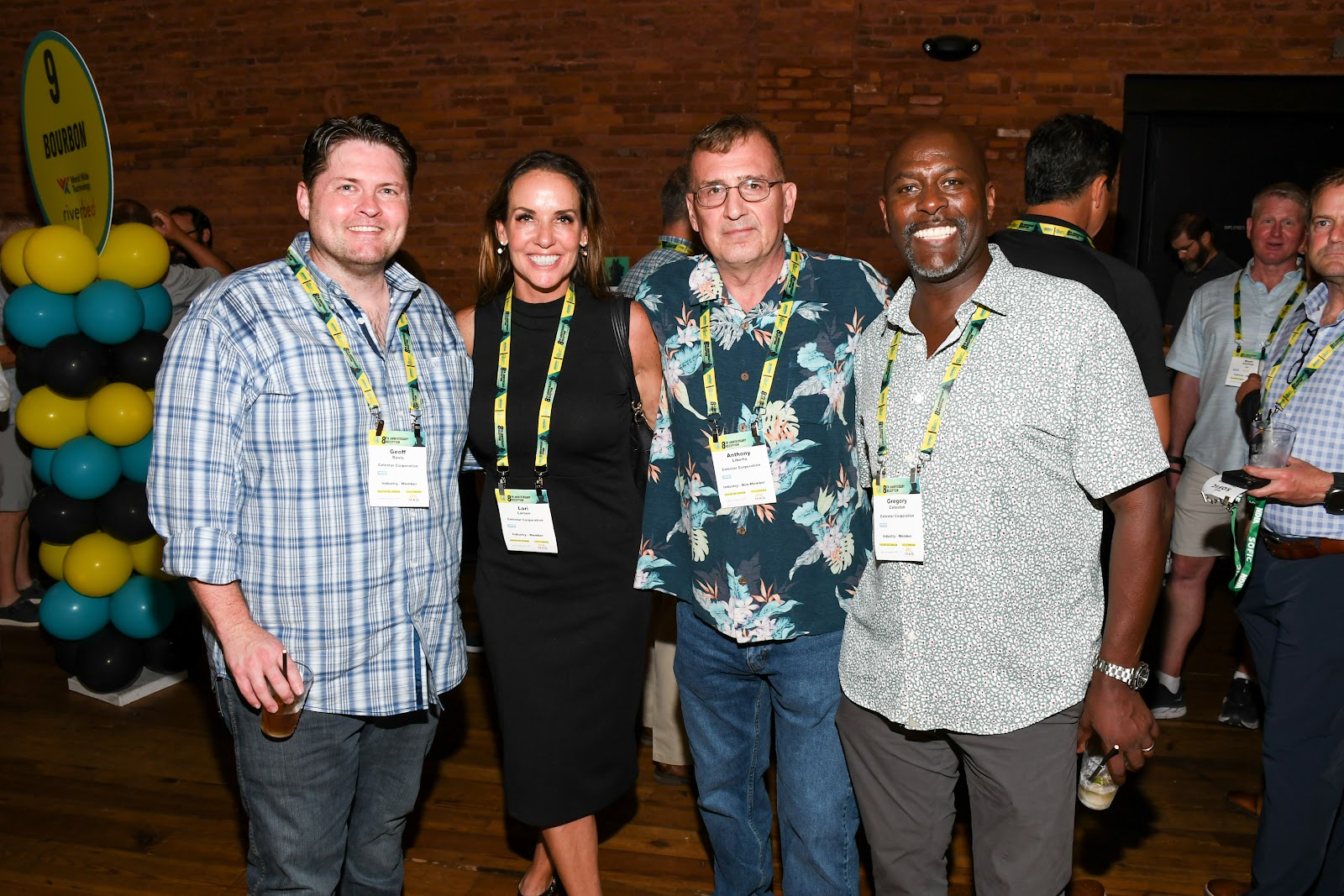 So we are very sorry to those of you who tried to register too late…at the door, online, or through extra complimentary emails. We, too, underestimated just how big this year would be and how badly our community was ready to get back together!

While our team was well aware of the clamor to attend, anyone who wasn’t aware found out quickly upon arrival…the line to get badged started well before the event did, and it quickly started to wrap around the building. However, our amazing caterers wasted no time in getting the drinks and food started in the line and overall it moved fast! 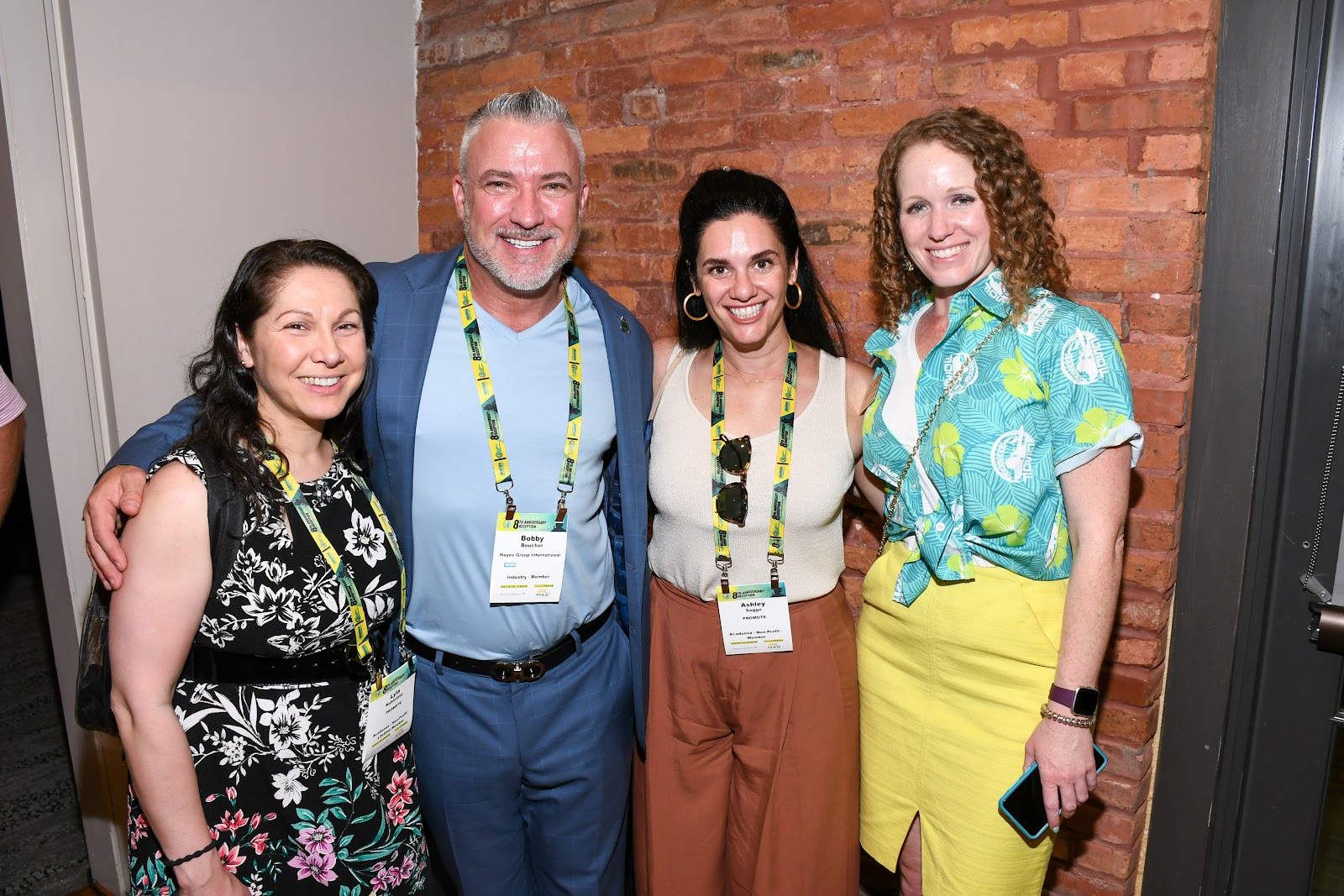 As one attendee said, “If you didn’t start meeting and catching up with people in the line, you were doing it wrong!”

Read on to see what everyone was waiting for…

Our 8th Anniversary Reception took place at Armature Works, a historic hub at the northern end of Tampa’s Riverwalk. With its brick walls, jumbotrons, and flexible space, it makes a great venue for our eclectic event. 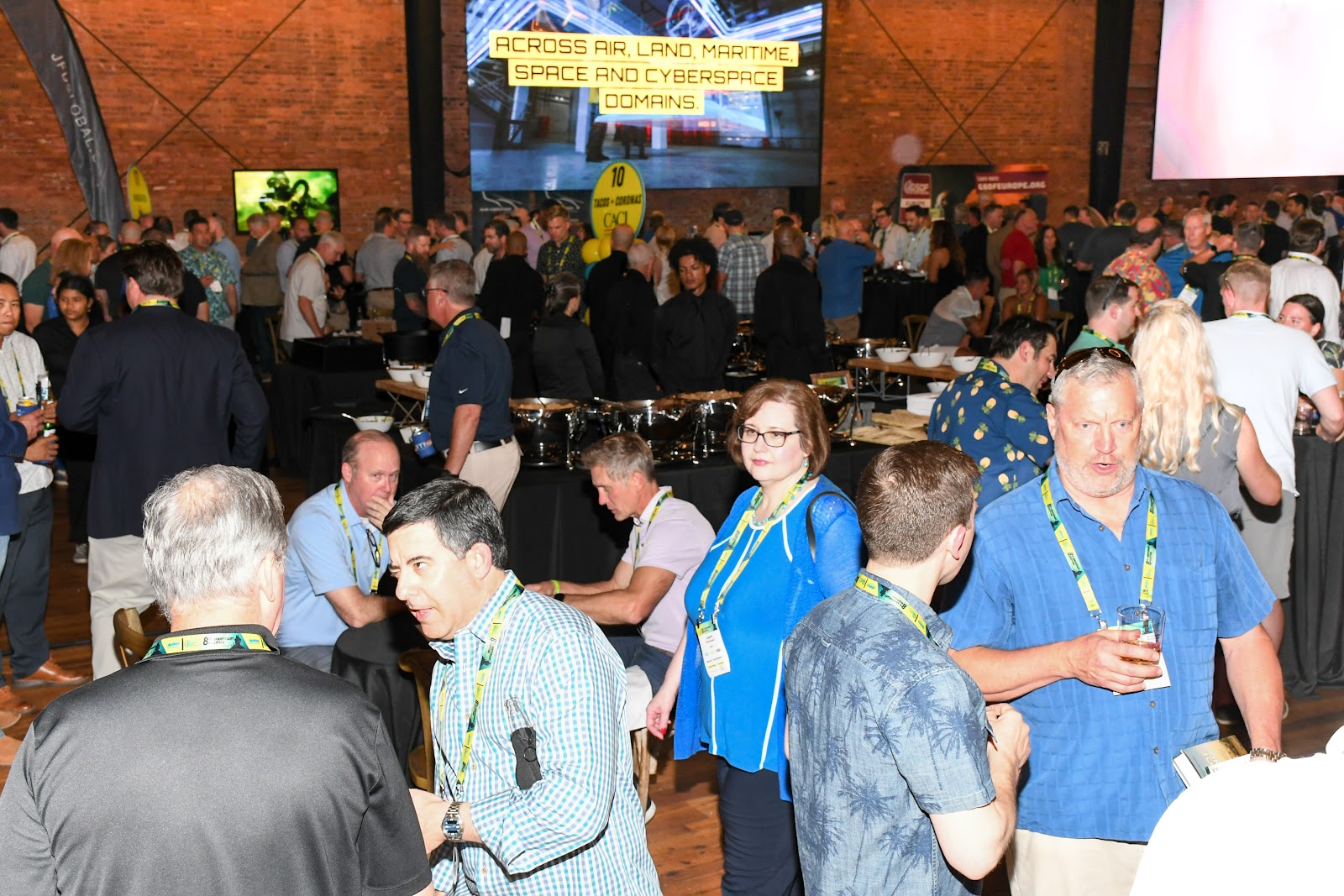 Because our Anniversary event has a LOT to it. We had almost 50 Corporate Partner tabletop displays and lounges (FREE to our Partners each year), games and activities, and food and drink scattered throughout.

All of this was made possible by our Presenting Sponsor, Bank of America, and our Title Sponsor, MAG Aerospace, along with the rest of our event sponsors. Here’s a glance at what we had…

All of the stations were a hit and “leftovers” were a foreign concept, but we must say that one of the biggest hits of the night was the new SHIRTS. 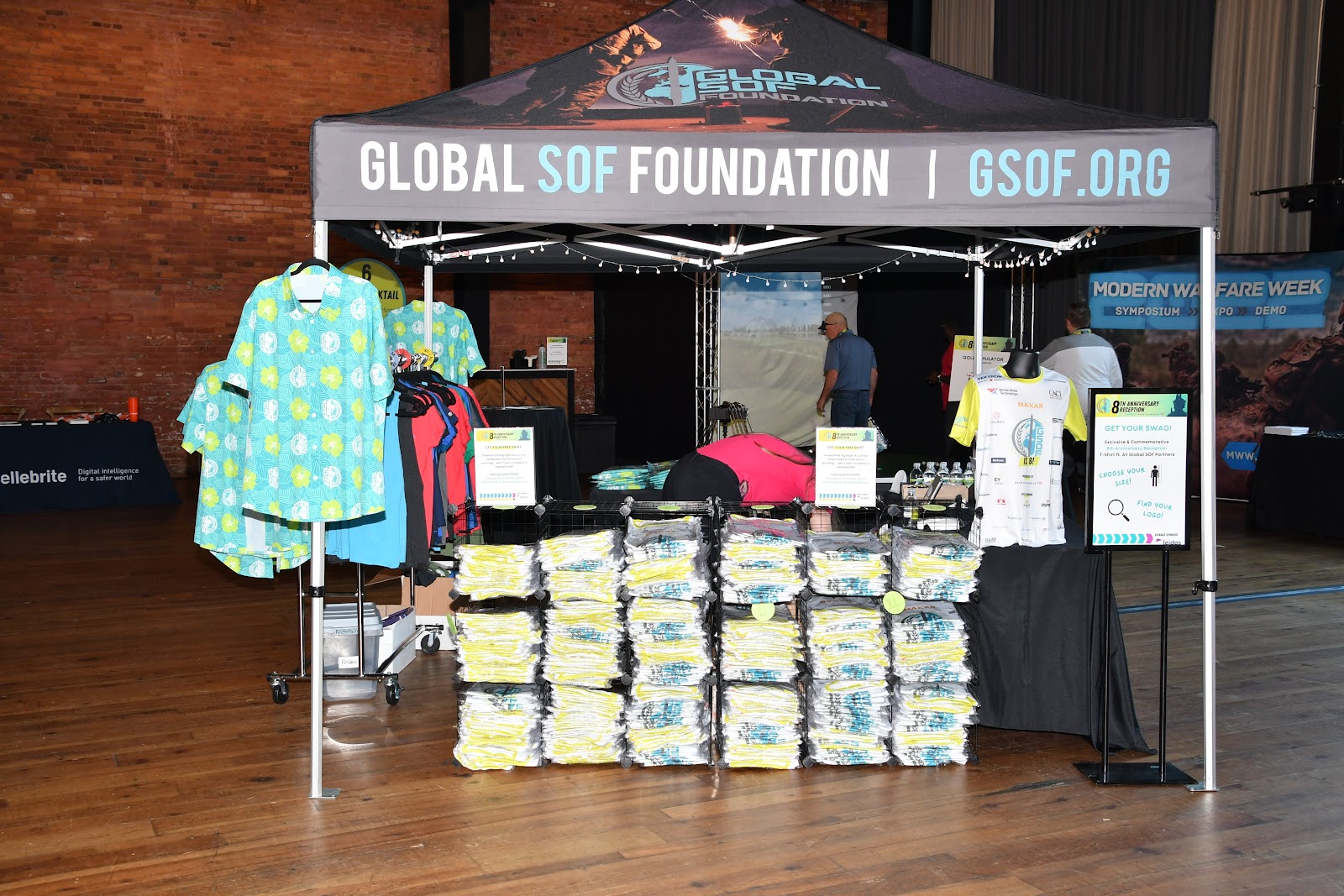 First off, we decided that we needed an 8th Anniversary workout shirt that listed Every. Single. Corporate. Partner. This idea may or may not have stemmed from Meaghan and Stu watching too much professional bowling on a work trip to St. Louis, but however it came about…we made it happen!

The shirts were available for every attendee to take as our “gift” for the 8 years… and although they’re a bit on the eccentric side, they were the talking point that we dreamed they would be. Plus–they’re really comfortable! 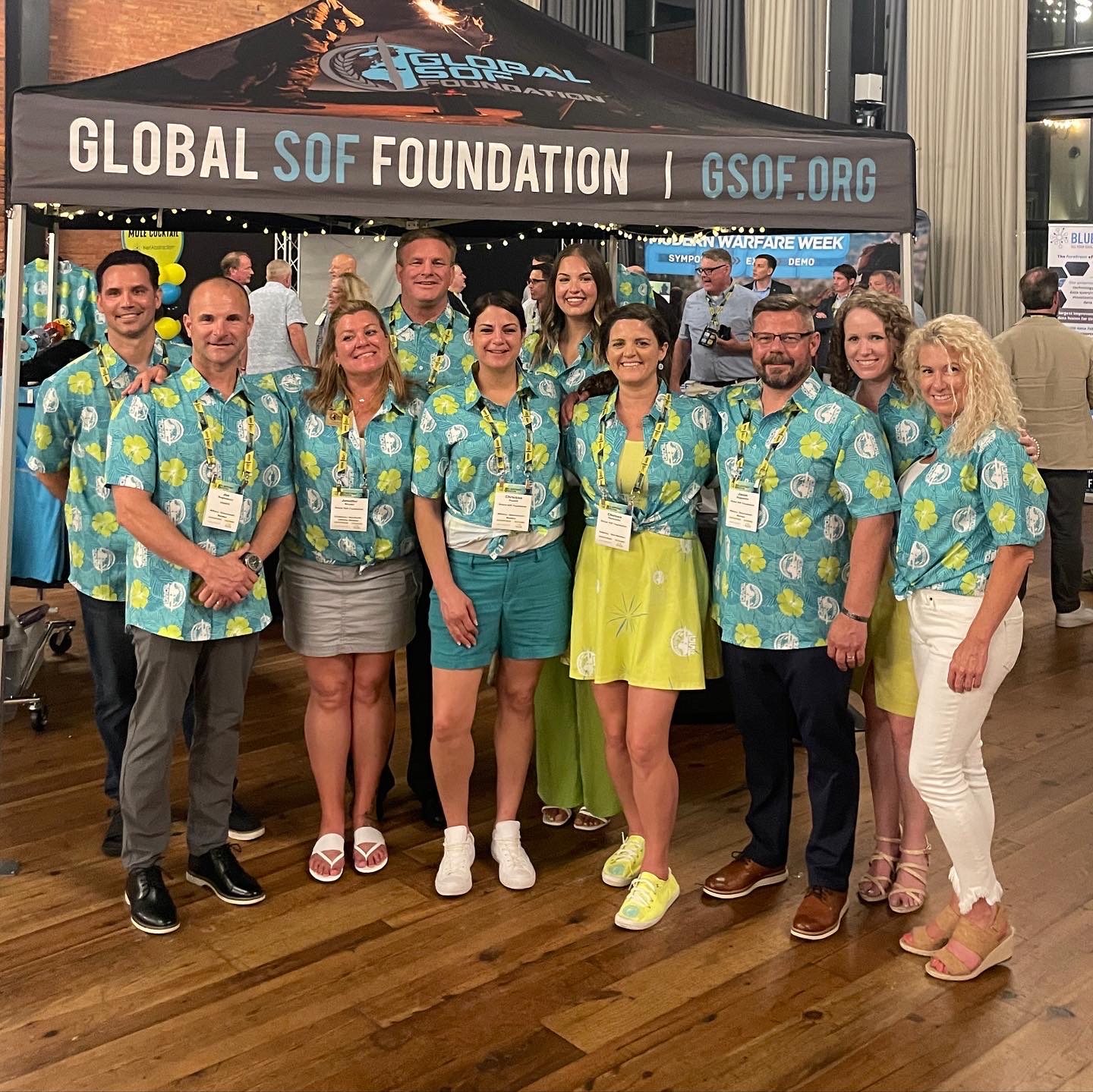 As much as we love the workout shirts, the real belle of the ball was our new Hawaiian shirts! We decided they needed to be our team “uniform” for the night (the dress code was Florida Casual, after all).

The few extra shirts that we had sold out in 15 minutes! I didn’t know we could sell 40 shirts in 15 minutes, but apparently our team made it happen. We will definitely be ordering more for next time…

So with all of those activities, popular swag, and 1,000 members of the SOF community all together in one place, we were honored to again kick off SOFIC week with the BEST networking event around.

Tip of the Harpoon

Anyone who knows Stu knows that we never sit around idly at Global SOF… you might think that a huge 1,000 person reception would be enough for us at SOFIC, but that is so 2019. 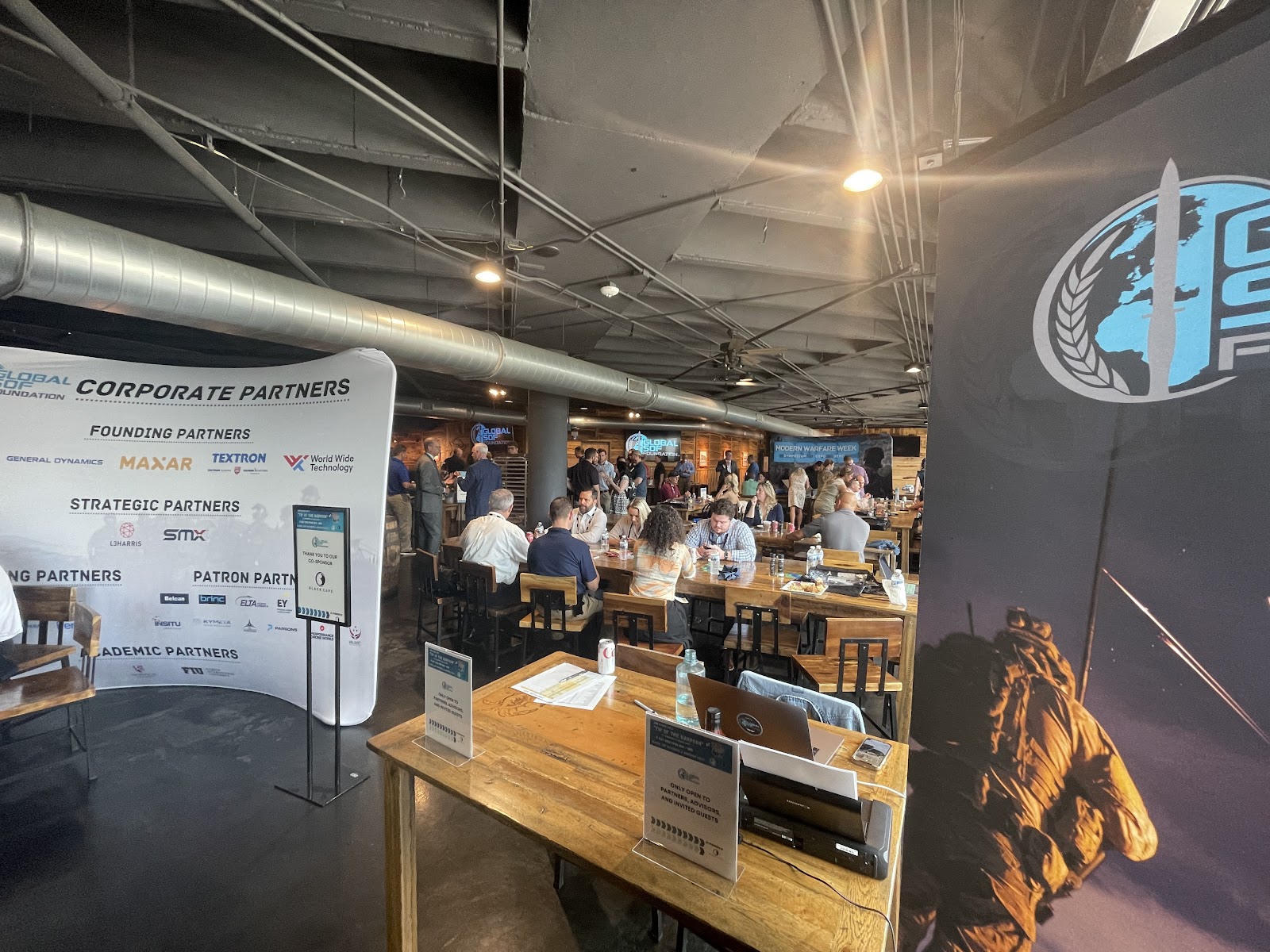 This year we reserved space at Harpoon Harry’s, the closest restaurant to the Tampa Convention Center that also is strangely incognito in its “kind of a parking garage?” location. We booked the second floor for Tuesday to give our Partners and Advisors a reprieve from the bustle of the Convention Center, as well as a place to reserve meetings and get some grub.

It was a bit of an experiment–as we weren’t sure how many of our companies would use it, but it ended up working out perfectly! 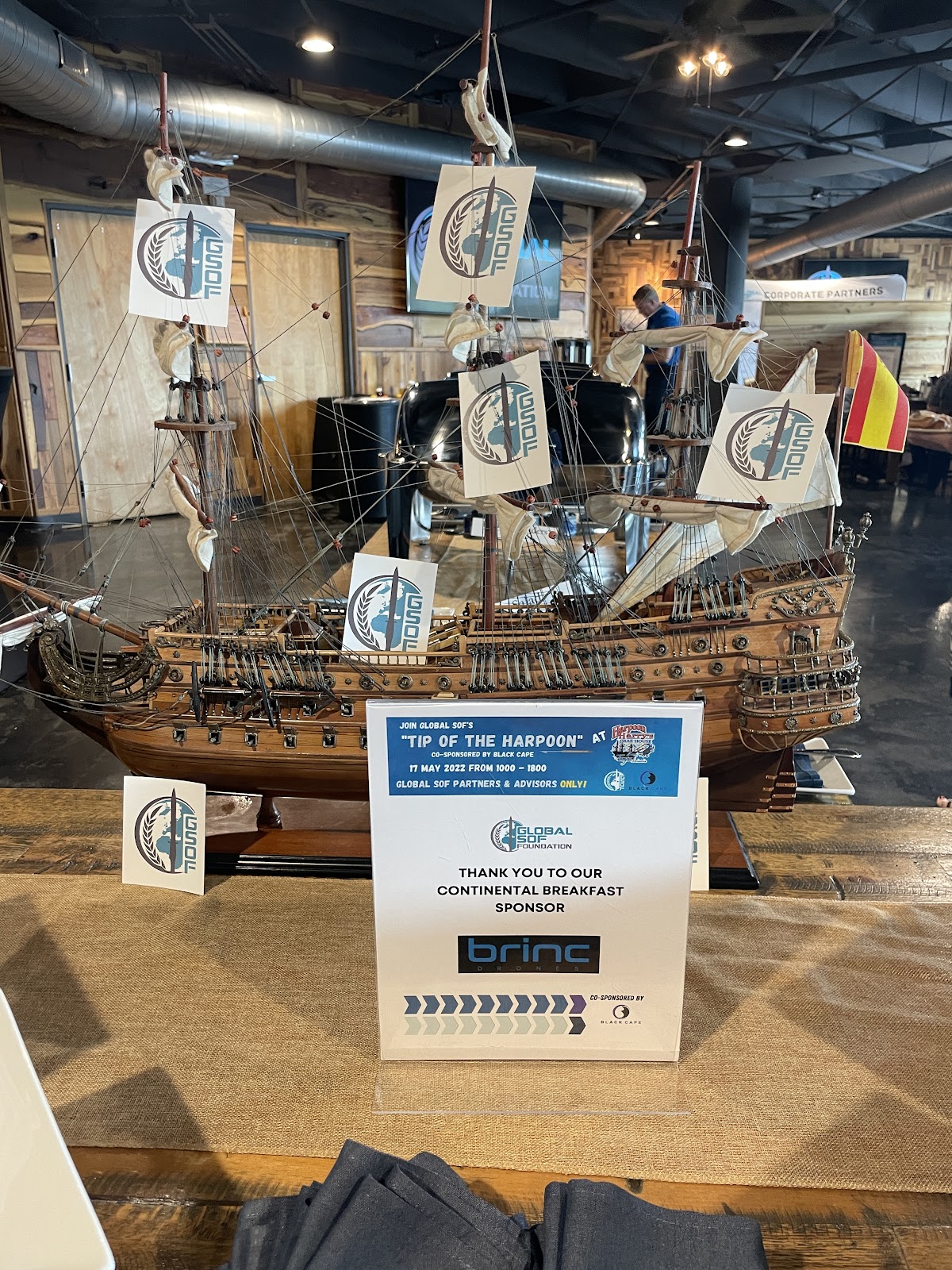 We called it the “Tip of the Harpoon” (because SOF are called the Tip of the Spear… and it was Harpoon Harry’s…you get it!) and had breakfast, lunch, happy hour, coffee, B2B meetings and committee meetings from 10AM to 6:30PM.

Huge thanks to all of the companies that sponsored to help make the booking and food/drinks possible, especially our co-sponsors at Black Cape. Also contributing were:

The reviews were overwhelmingly positive and we’ve already reserved next year for Tuesday AND Wednesday. It will again only be open to our Partners and Advisors, so make sure you’re on that list…

The Reason for the Season

In addition to our events, we jumped into SOFIC week with choreographed plans to meet with our current Corporate Partners, engage with potential partners, meet with our international SOF brothers and sisters, and check out some of the latest in SOF capabilities.

For newer members of our team who come from the civilian side, it was a great opportunity to learn more about the capabilities that enable SOF mission sets, see the always-impressive ISOF CAPEX, and learn from members of the Active Duty community. 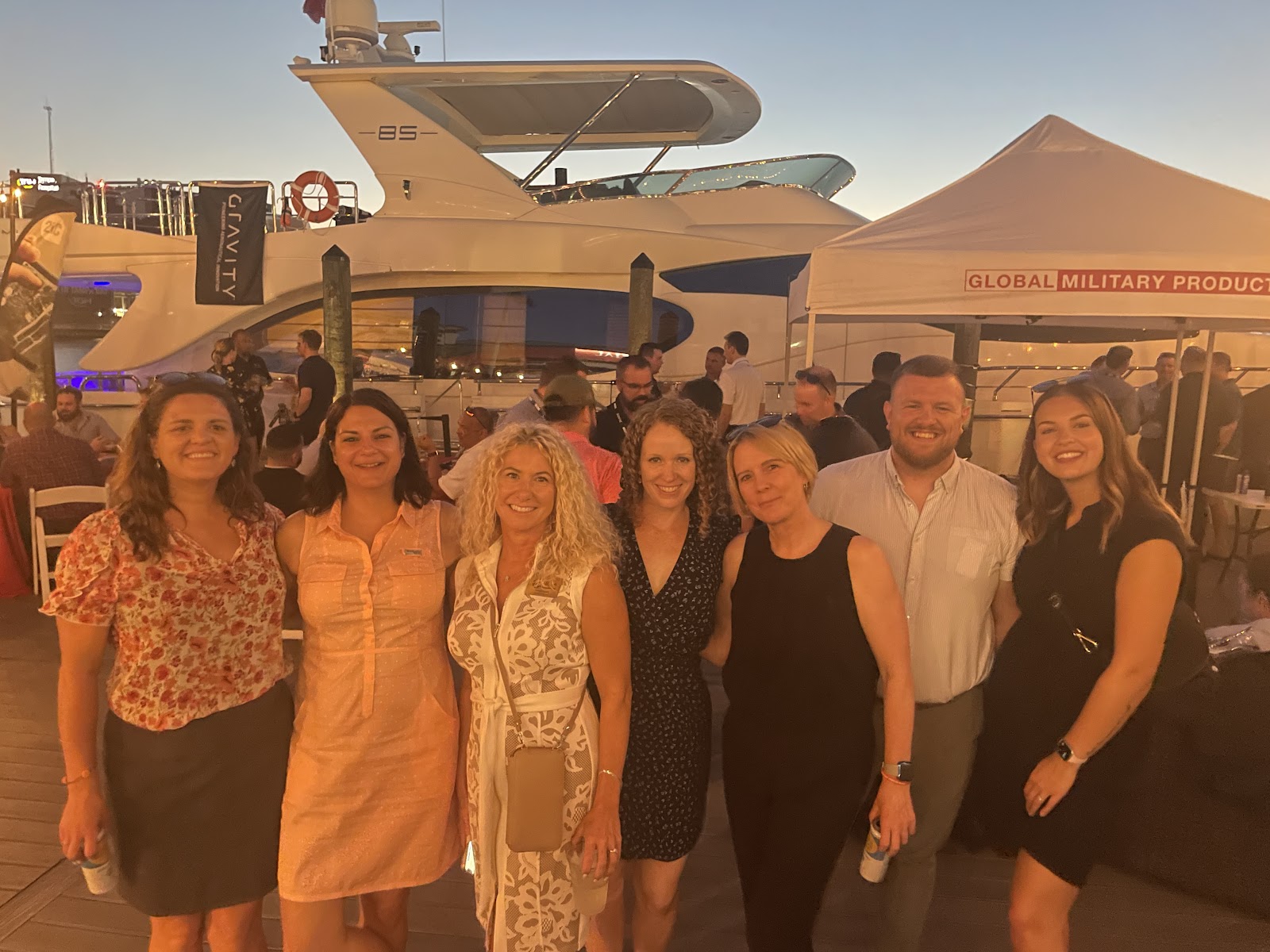 For our former military team, there were reunions galore, the chance to see what new tech has developed, and continued growth of that industry rolodex.

We also had another group with our team: our SkillBridge Fellows. SkillBridge is a program that allows Active Duty Military members to intern with approved organizations in their last six months prior to separation from service. 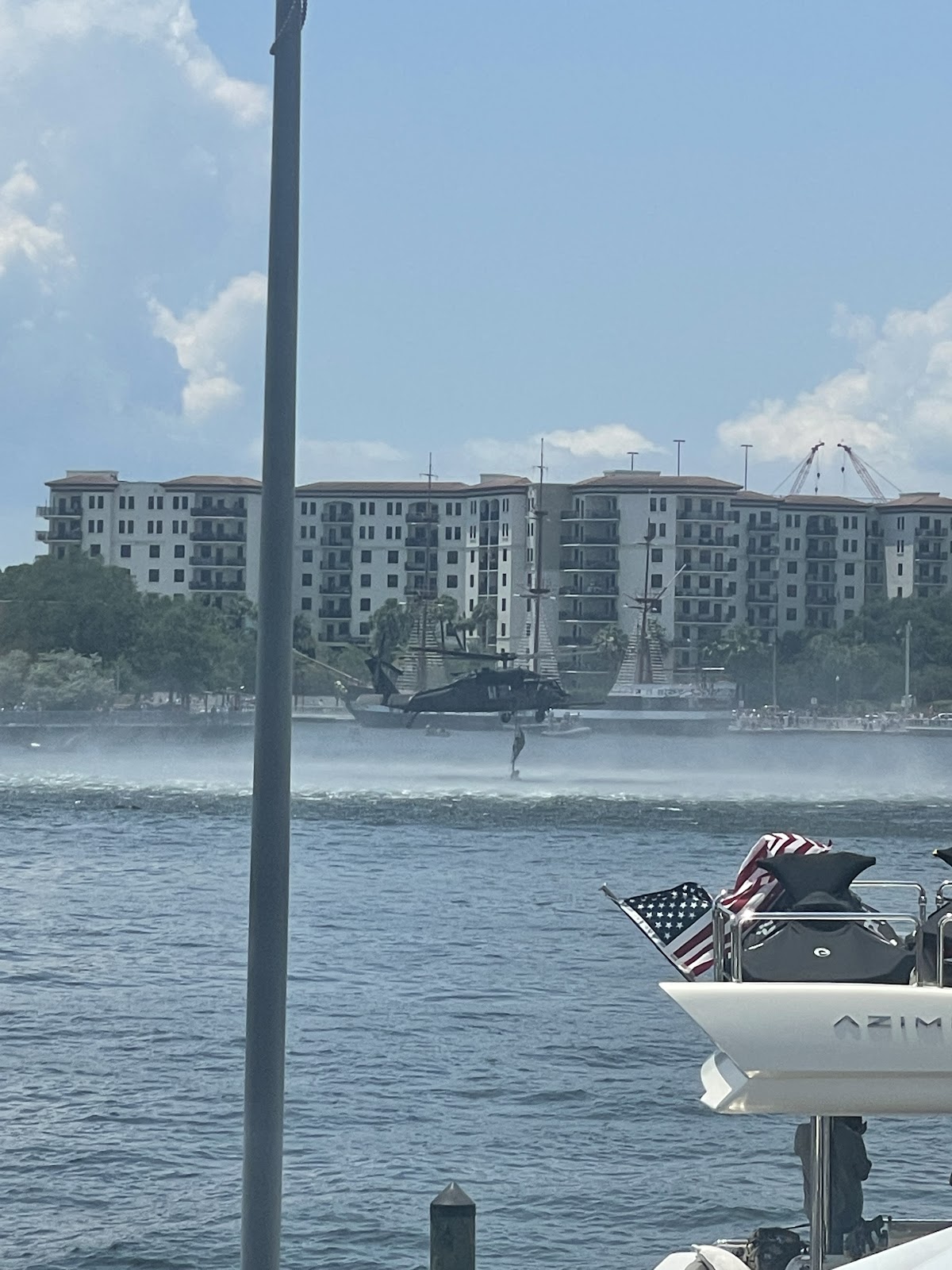 Global SOF has hosted seven SkillBridge fellows over the years, and always just one at a time. But in 2022, we decided to go big…and at SOFIC we had 5 SkillBridge Fellows supporting us!

The conference was a great way for them to both learn more about what Global SOF does, but also work on growing their professional networks as they move toward their final closeout of the military chapters of their careers. We were so grateful to all of them for the help they provided throughout the week–excellent team players that we’re glad to now call friends!

Overall, the Global SOF Team had an amazing SOFIC. We hope to carry the momentum into our next big events this year: the Global SOF Symposium in Budapest from 4-6 October and Modern Warfare Week in Ft. Bragg from 7-9 November.

We’ll see you there!