When the pandemic started, we quickly transitioned many of our small engagements from in-person gatherings to virtual events. We’ve held a variety of educational opportunities for our Partners (like Brown Bags and Partner Spotlights) and Members (SOF for Life Transition Seminars). 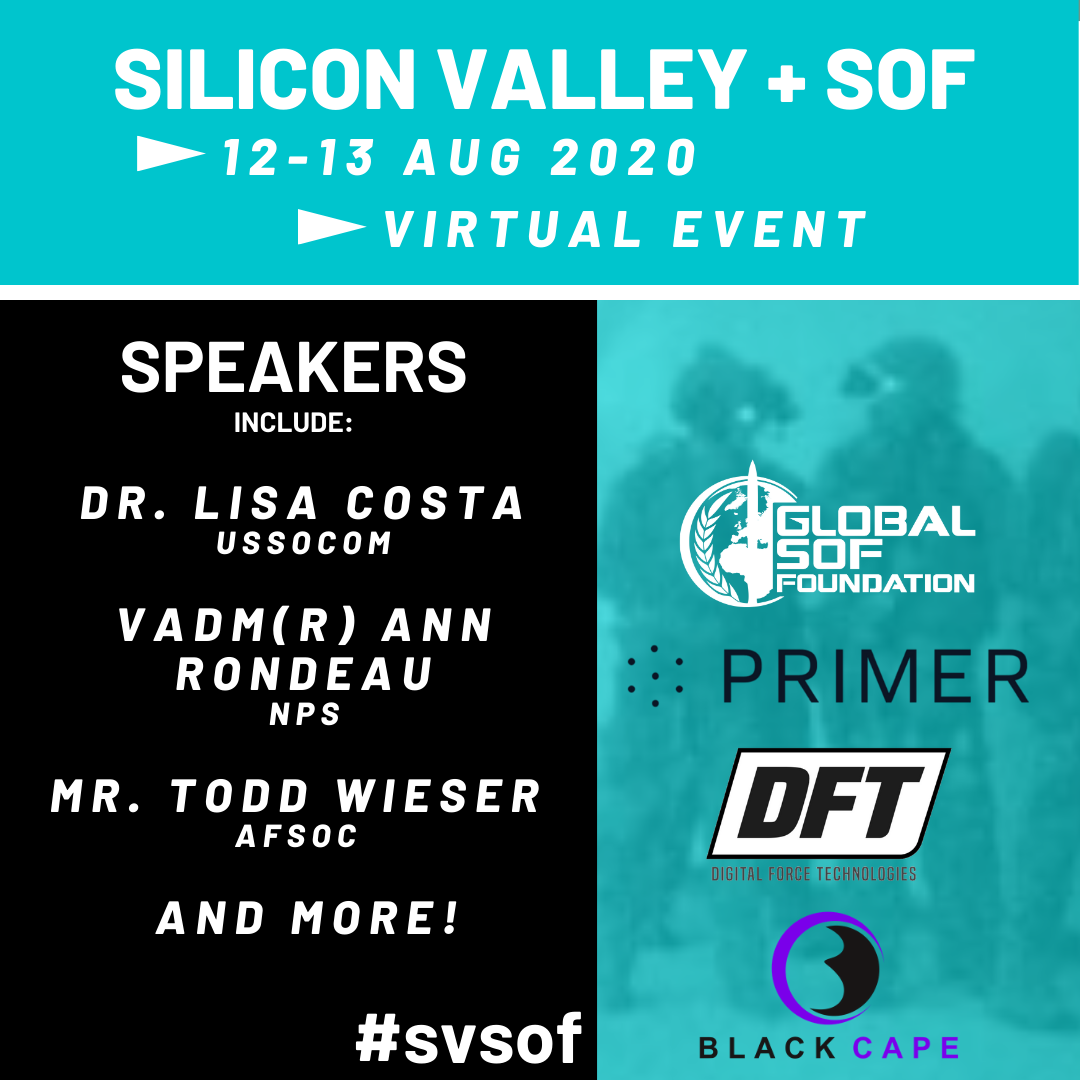 We have, however, had to postpone some of our bigger in-person events to time frames that will hopefully be COVID-free.

That event was “Silicon Valley + SOF: Investing and Fielding Innovation”, and it finally happened last week. And we were very glad to have Black Cape and Digital Force Technologies as sponsors!

The partnership between the U.S. military and Silicon Valley has evolved over the last several decades and even more so in recent years. A variety of new organizations and mechanisms – from In-Q-Tel, to DIU, to AFWERX, to Project Maven, to VCs – have begun to rewrite how tech startups can partner with the military. However, friction persists in taking technology developed in Silicon Valley and rapidly deploying it to operators and analysts….

For that reason, the Foundation partnered with one of our Small Business Partners in the SV space, Primer, to invite current and future national security leaders to a two-day virtual seminar with tech founders, executives, investors, and academics focused on developing cutting-edge dual-use technologies. Topics included:

It was apparent in the planning of this event that pretty much across the board, everyone agrees that there’s an important gap to bridge when it comes to taking those key technologies and putting them in the hands of our warfighters to ensure their competitive edge.

One organization that we worked closely with in the planning and execution of SV+SOF is the Naval Postgraduate School, or NPS. NPS is a graduate university located in Monterey, CA (proximate to Silicon Valley) offering master’s and doctoral degrees in more than 70 fields of study to the U.S. Armed Forces, DOD civilians, and international partners.

We were thrilled to have current NPS students and faculty participate in a number of sessions over the course of the event. On day one, a trio that included two faculty members and one current Navy SEAL presented a new proposed curriculum entitled, “Applied Design for Innovation”.

This curriculum is aiming to shift to a “culture of adaptability,” and with NPS’s proximity to Silicon Valley they intend to place SOF in the nexus of academia and tech companies to make them more effective. The new program should be approved this Fall, and at that point NPS is “open for business and looking for challenges and partners” to help them succeed. 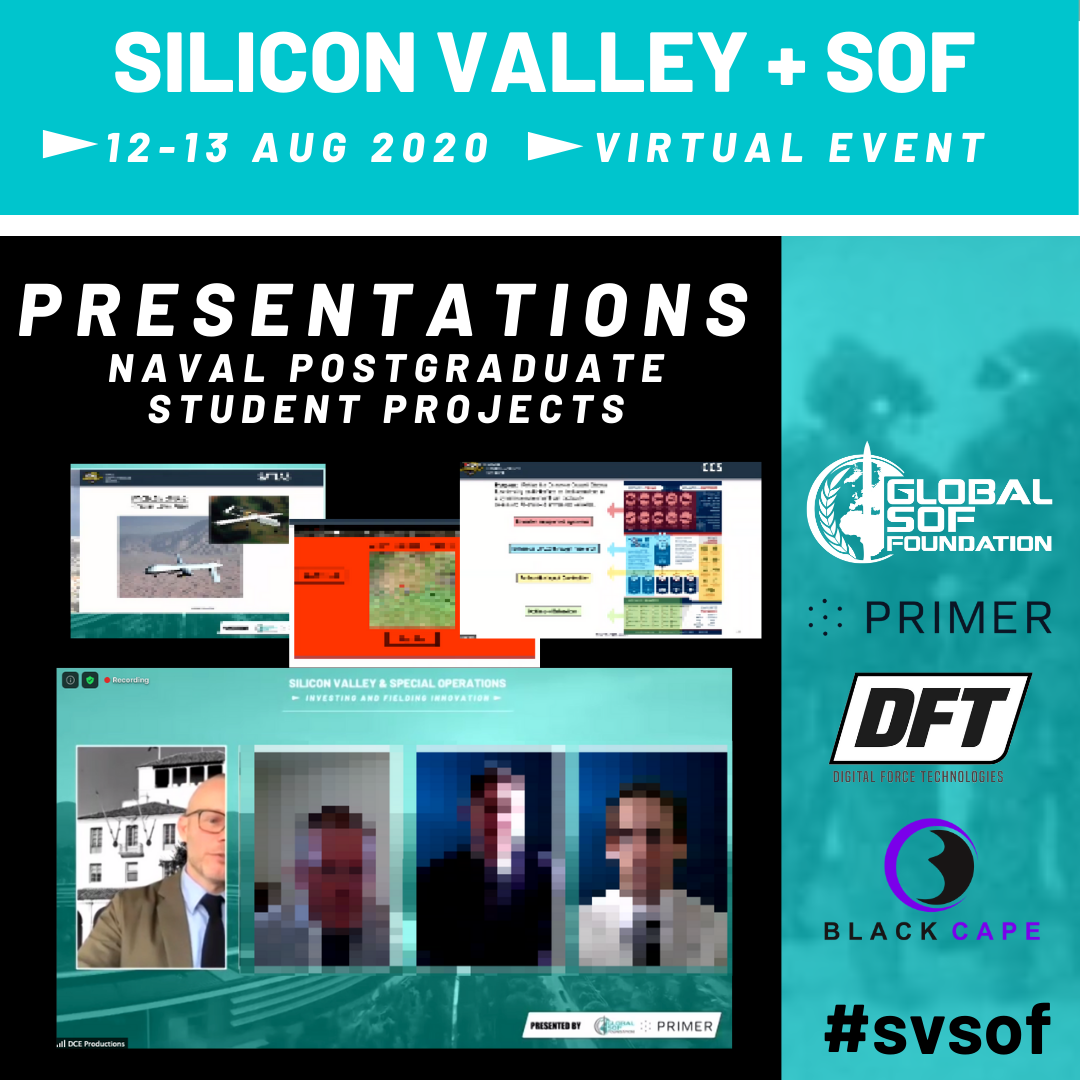 The second set of NPS presentations was much more specific, with three current student groups diving into their team’s innovation projects.

Many of these projects started in a familiar fashion–with a group of SOF having some beers around a table and discussing their shared experiences. As often happens, some of those stories included similar challenges, and from there… innovation projects were born!

Of the three projects presented there was a common theme–better battlefield situational awareness and data aggregation for operators. The approaches and platforms used to tackle the problem were quite different, highlighting that the challenge is real and is certainly not simple to solve.

“The Threat is Elsewhere!”

One of the greatest challenges within a government organization is making change. One speaker this week called the DoD acquisition process the “Valley of Death,” and another highlighted that although the Pentagon is the “last bastion of true competence in America… it doesn’t move fast.”

Therefore we were honored to get insider perspectives on how some of these SOF institutions are working to more effectively enact change from Dr. Lisa Costa, the CIO at USSOCOM, Mr. Snehal Antani, the CTO at JSOC, and Mr. Todd Weiser, Innovation Director and CTO at AFSOC. 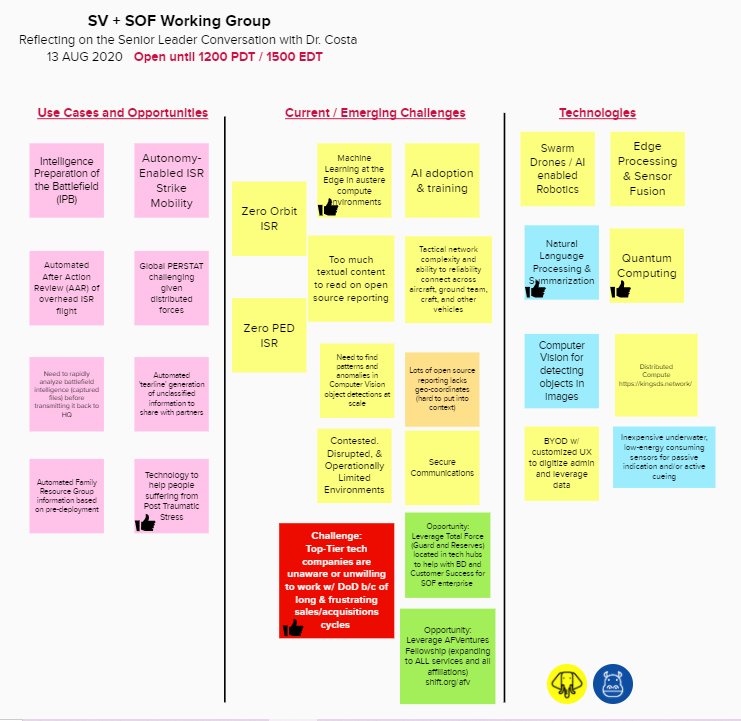 Dr. Costa participated in a Senior Leader Conversation that was led by Abe Usher, a co-founder at sponsoring organization and Global SOF Partner, Black Cape. The pair discussed the “constructive demolition derby” that is the convergence of so many technologies right now, and how SOCOM is good at being the “incubator” of ideas for the rest of the DoD.

Their conversation transitioned nicely into one of the week’s two interactive brainstorming sessions, which were held via an online whiteboard tool called “Mural.” Participants added input to Mission Use Cases, current and emerging challenges facing SOCOM, and technologies to monitor for the future. Participants included SOF operators, analysts, NPS students, and industry technology experts. 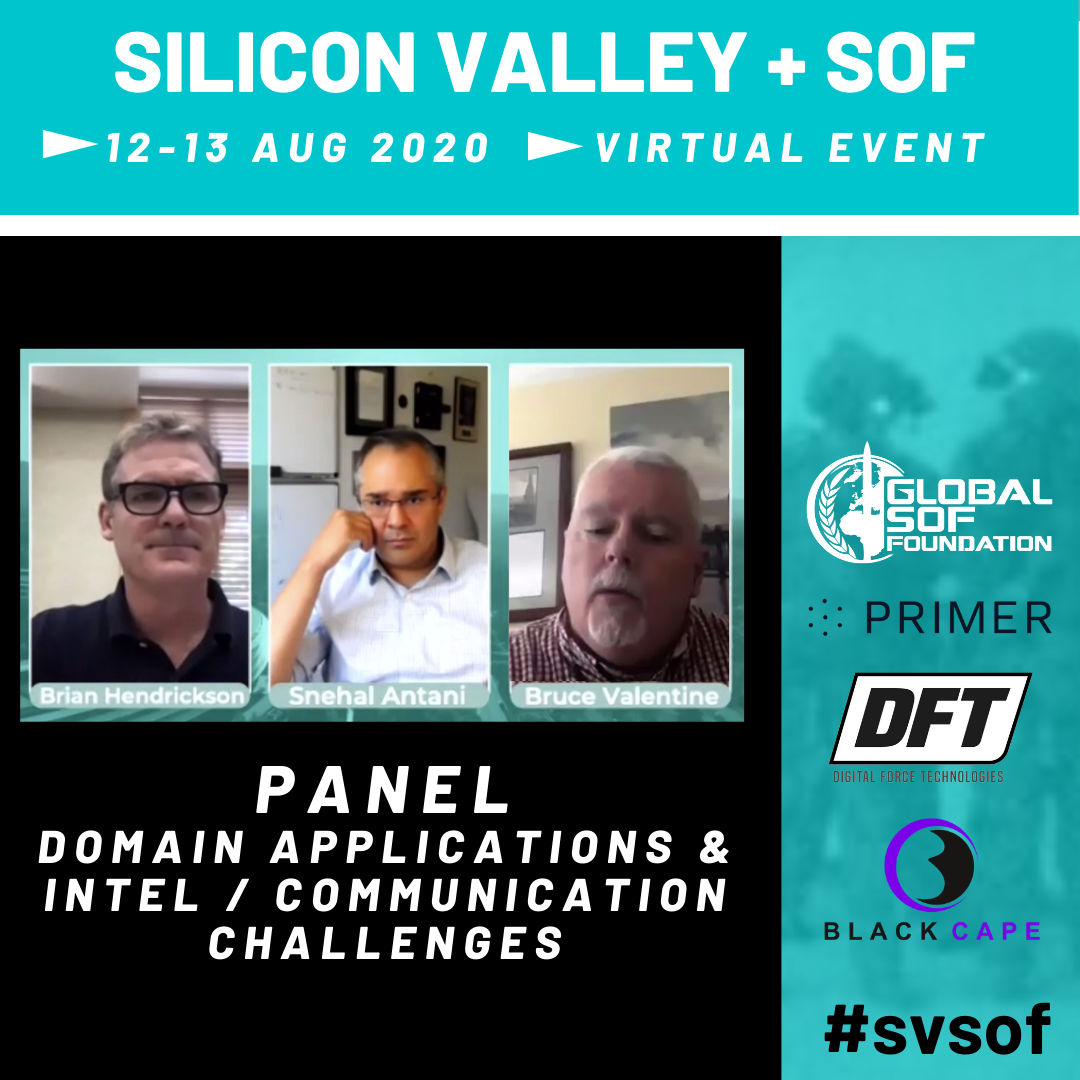 Mr. Antani, who has extensive experience in both Silicon Valley and DoD, spoke on a panel about Domain Applications and Intel / Comms Challenges–along with Mr. Bruce Valentine and RADM (Ret) Brian Hendrickson.

Their conversation focused more broadly on larger issues like the Great Power Competition and what the U.S. and its allies will need to do to truly work “jointly” and eliminate the perception that other internal organizations present a threat. “The threat is elsewhere!”

We were thrilled to have Mr. Todd Weiser on the agenda–he’s the Innovation Director and CTO at Air Force Special Operations Command, or AFSOC. He and his team actually reached out to us when they heard about this event and said: “We want in!”

Mr. Weiser, along with Maj. Devin Beckwith, presented AFSOC’s Innovation Priorities, which provided a lot of great information on what AFSOC is focusing on and the available opportunities for industry to get involved and help make that happen.

The speakers at this event spent a lot of time talking about bureaucratic challenges, common issues, and ways we can enact change. But a common theme across the board was that the DoD wants to–needs to–work more closely with industry, and that we need to figure out ways to make that happen.

It’s not a new idea, but more of an old problem. That’s why we opened the event with CSM (Ret) Rick Lamb, who presented a “Scene Setter” to get that issue out there from minute one. He took from his experiences as SOF going back to the late 70s, and specifically his first-hand experiences with the failed Operation EAGLE CLAW. 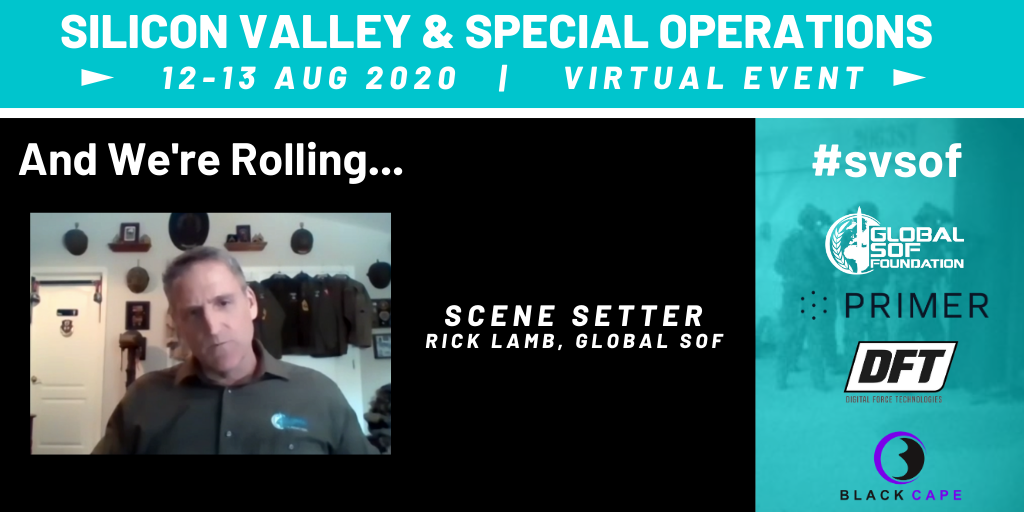 Rick said that we “always seem to fight the next conflict with the equipment and tactics from the last conflict,” highlighting specific instances where that yielded less than desirable results. Sometimes resulting in the loss of life of U.S. or Partner Nation servicemembers.

“If we don’t adapt, we’re all going to die tired.”

And we don’t want to die tired! So we got industry involved in this event, with specific focus on how they can continuously engage with the DoD.

One panel that dug deep into this topic was the venture capitalism panel, “VC and the U.S. Government.” It was moderated by our friend and new venture capitalist, Joe Musselman–who you may know as the Founder of The Honor Foundation.

He spoke with representatives from two organizations that work hard to provide opportunities for VC and DoD to collide: Mr. Matt Ocko of Data Collective (DCVC) and Ms. Kristen Hajduk from National Security Innovation Network (NSIN). 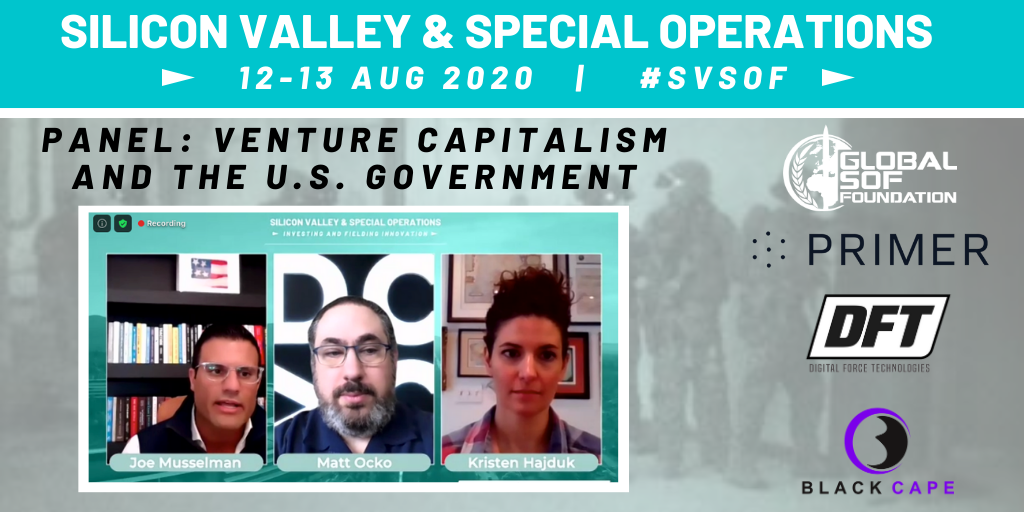 Ms. Hajduk spoke about how “VCs want to better understand the DoD demand signal and use first hand operator feedback to determine what to invest in,” therefore working to bring those two groups together.

And all three panelists spoke to the value of a third group–recently transitioned or transitioning SOF. As Mr. Ocko said he just hired someone who fits that description, and the value of bringing those recent SOF experiences into a fast-moving tech environment has been huge.

Sean Gourley, CEO and Founder of our co-host, Primer, gave some really insightful opening remarks on day 2. He spoke to the way technology is changing warfare, especially in terms of machine learning.

“We need to close the cultural gap between tech companies and government, and this must happen on both sides…there must be people in the DoD who can leverage new technologies from the inside.”

And who better to take on that challenge within the DoD than SOF?

We would be remiss not to mention Dr. Keenan Yoho, who didn’t hesitate when we asked him to serve as the Master of Ceremonies for BOTH days of this event.

Keenan is the long-time VP of the Global SOF Foundation, and in his day job he’s a tenured professor at the Crummer School of Business at Rollins College. He’s also an eloquent and unshakeable public speaker, so we knew for our first virtual event–Dr. Yoho was our man!

So a big thank you to him for doing all of the event intros and outros–including for our final speaker, VADM (Ret) Ann Rondeau! 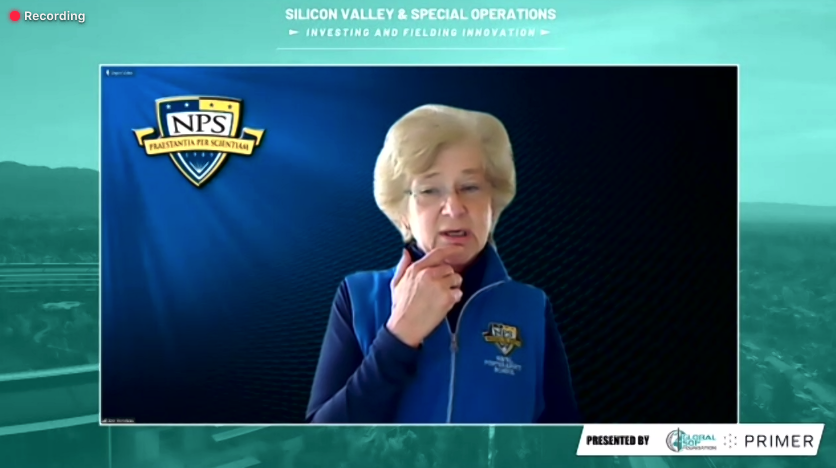 VADM Rondeau is the President of NPS, and she did a Grade-A job of summarizing the full event in her closing remarks. She pulled a highlight or a lesson learned from every single session, and then hammered it all home by talking about how her institution is “ready to engage fully with our industry partners!”

We’re excited for this community to take on that challenge.

Thank you so much once again to everyone who participated in this event, and we look forward to what the future holds for collaboration between Silicon Valley and SOF.