And just like that, we’re on the last day of our fifth European Symposium. After over 2 years of planning, 1 worldwide pandemic, and sometimes 0 certainty about what we were doing… we did it!

Read on to see what happened for the final day of this very special occasion in Warsaw.

The Best One I’ve Ever Seen

We always start the last day of our European Symposiums with a SOF Commander’s Roundtable. This is meant to bring together all of the SOF leaders from represented nations to discuss shared issues and potential solutions.

This can sometimes be a meeting where attendees hold back–due to language and cultural barriers, a desire to keep things close-hold, etc. However, in the words of Global SOF President and CEO Stu Bradin, “This was the best one I’ve ever seen.”

Under the leadership of POLSOCOM Commander Major General Slawomir Drumowicz, the roundtable was vibrant and impactful. He called on every attendee to speak about at least one topic of discussion, and that approach led to an active discussion.

For reasons that will only be known to the attendees, this led the Major General to receive the call sign “Pipehitter 6”…this will be a callback later!

While the roundtable discussion was going on, all of the non-SOF-Commanders in the house were doing their own rounds in the exhibit hall. But as 0930 approached, the crowds made their way through the security protocols and up to the ballroom for the opening keynote of the day: Major General PhD Piotr A. Bɫazeusz, Deputy Chief of General Staff of the Polish Armed Forces.

Dr Jacek Bartosiak, the CEO and Founder of Strategy & Future for The Future of Central European Defence and Security, is a busy man! We were honored that he was able to join us at the Symposium, and especially to lead the Senior Leader Conversation with Major General Bɫazeusz.

The two gentlemen had a lively conversation about the state of military operations in Poland and shared their extensive experience with the community.

Another Polish speaker was next on the stage– Mr. Tomasz Kozlowski from Jump for the Planet. He was the first of the day’s two SOF Slams, which are what we call our 30-minute sessions that are focused on SOF-relevant topics that are not necessarily military in nature.

Tomasz is very impressive and has completed feats like 100 skydives in 9 hours to raise money for underprivileged children and housing projects. If that’s not impressive enough, he’s also a great public speaker and shared a really interesting presentation about his incredible projects.

A huge thank you to Tomasz for joining us and for everything he’s doing to make the world better.

Our final solo speaker of the morning was a longtime friend and collaborator of Stu’s: Dr Robert De Wijk, the Founder of The Hague Centre for Strategic Studies.

He spoke about Special Operations from an academic standpoint, focusing on the impacts of wars of choice versus wars of necessity. He repeated a theme of the week; SOF is not going away. The new roles he sees for SOF include:

After a networking break that marked one of the final opportunities to visit the exhibit hall, we had one more panel to round out the morning: “Recruiting and Retaining SOF.” Over and over again this is a recurring theme with the US and all of our partner nations, so we brought in an array of people from the community to discuss it.

With our own Director of Government Relations, CSM (Ret) Rick Lamb, leading the charge, we knew it would be a strong conversation. He was joined by Ms. Katherine Kuzminski of the Center for a New American Security, Mr. Frank Steder of the Norwegian Defence Research Establishment, and Dr. Alicia Fuller from Norwich University.

The panel discussed things like the effects on younger generations of screen time, eligibility to serve, mental toughness, and work/life balance. And as one attendee said, “That was really interesting, I could have listened to each of them talk for at least an hour!”

Alas, we don’t have that kind of time…but we’re sure many of the conversations were continued at our last networking lunch!

“Of all the events that they have done this year, that was the best and most successful,” said our partners at Logos Imaging during the final lunch of the Symposium.

Thank you to Logos and ALL of the companies who joined us this week to present, sponsor, and exhibit! We LITERALLY couldn’t do it without you.

After another delicious meal from the Warsaw Marriott (#PierogiTime), our now-over-450 attendees headed back to the ballroom for our final presenters of the event.

The first was another SOF Slam, all about “Using Leading KPI’s Within Human Performance to Improve Warfighter Readiness,” which was presented by Dr Phil Wagner, the CEO & Founder of our Partners at Sparta Science. 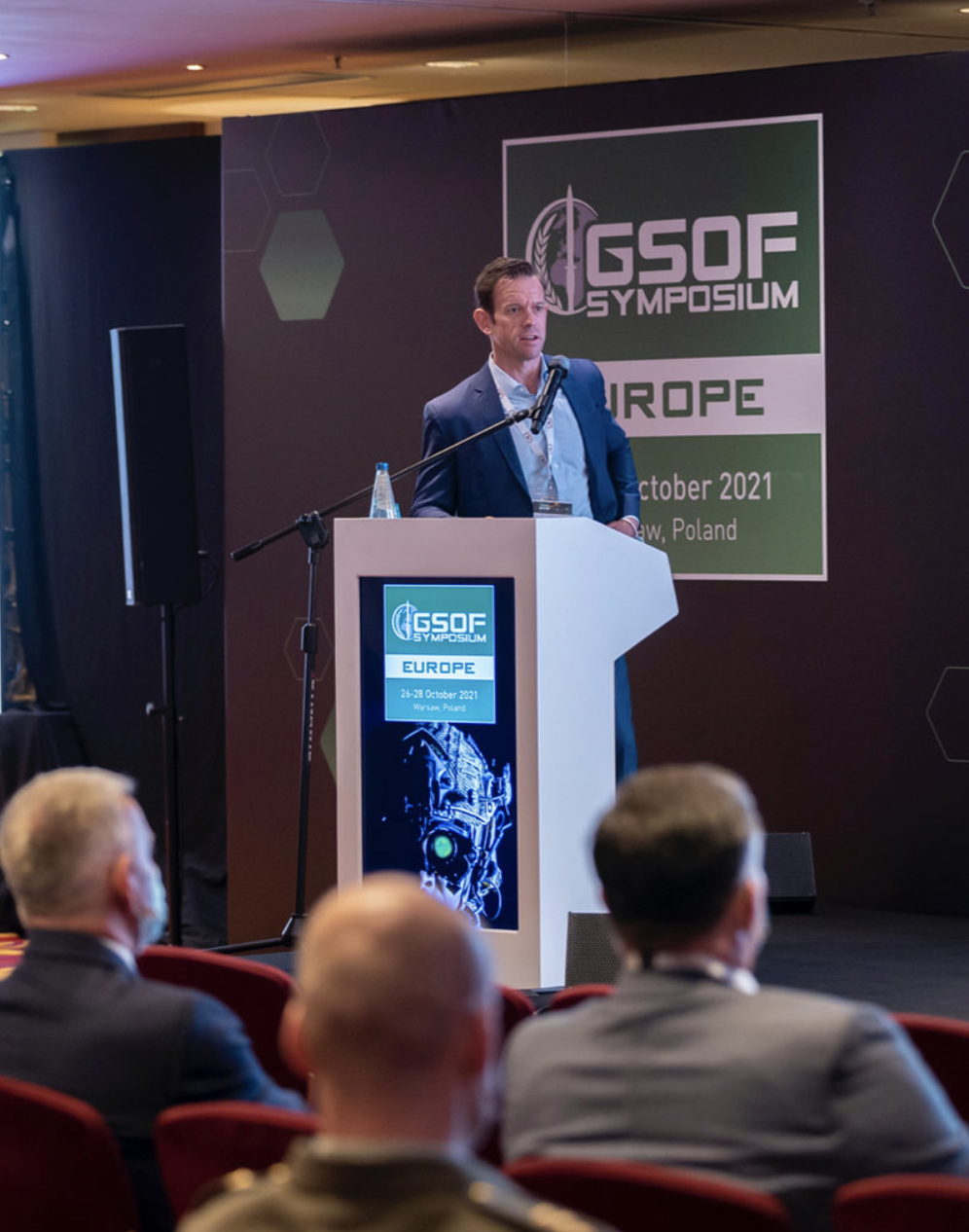 Dr. Wagner and his team are dedicated to helping the elite warriors and athletes of the world live safe and healthy lives, and he gave a really fascinating presentation on the things that we need to focus on to ensure that health.

The final panel of the Symposium was focused on “Prospects for Regional Intelligence Centers.”

The speakers on this panel were:

Due to security concerns for some of these panelists, we weren’t able to take any photos or videos, but it was an engaging conversation. And as one speaker said, “this is intelligence, this is not diplomacy.” A very different set of rules and approaches should be involved.

Can You Believe It!?

As always, we wrapped up the event with a lot of “Dziękuję” (Polish for “Thank You”).

We’re so thankful to our partners in Poland and at Clarion Events for all of the steadfast support and tireless effort to make this happen. We brought up our Polish partners to gift them with a Global SOF shield, and in turn they brought up Stu and Keenan to gift them with incredibly special custom gifts, as well!

A part of us did remain surprised that we were actually able to pull this off… after nearly 2 years of COVID19, it seemed like a far off dream and we are thrilled that we could make it a reality.

Thank you SO MUCH to the well over 450 people from 28 nations who joined us in Warsaw. You can see all of the event photos here:

Plus, we look forward to seeing you at our events in the future!