One reason we like the Government Only Day is that it’s a bit of a dress rehearsal. There are fewer attendees and it gives us a chance to work out any rough patches before the full event begins.

So the dress rehearsal is over…. It’s officially SHOW TIME!

There’s a Buzz in the Air

Thanks to the Welcome Reception, there wasn’t much need for icebreaking on the morning of Day 2, which created a vibrant and excited atmosphere.

Our Director of Partner Relations, Jenn Brooks put it best as we prepared for the first sessions of the day: “There’s a buzz in the air!”

Attendees filtered into the Exhibit Hall for some coffee, sponsored by Chainalysis, and to see what was on display. From the POLSOCOM static display right by the front door to maritime inflatables to weapons systems and even to a rapid COVID testing machine, there was plenty to see!

As we reached 0900, our dedicated “Chime Queen” (aka our Marketing and Events Coordinator Kate Geercken) clanged away on the chimes to notify those in the crowd that it was “Go Time” for the Symposium sessions. The Foundation is proud and honored to have Dr. Keenan Yoho as a Vice President and repeat Master of Ceremonies, and he was kind enough to step in and fill those shoes once again.

As always, Keenan wonderfully introduced the Symposium and first presenter of the day, Prof. Hubert Krolikowski from the Department of Political and International Studies at the University of Krakow. Fun fact–it’s one of the oldest universities in Europe, founded in 1364. Pretty impressive!

Dr. Krolikowski holds a Ph.D. in Military History from the Military Historical Institute and habilitation in National Security from the National Defense Academy in Warsaw. So we didn’t think there were too many people more qualified to talk to us about the history and importance of the 1920 Battle of Warsaw, which was won in Warsaw just over 100 years ago.

After the history lesson, we were honored to have Dr. Joseph Long from the Joint Special Operations University (more commonly known as JSOU) from USSOCOM. He gave a very interesting presentation on the “4th Age of SOF” that was so thought-provoking that the questions went well into the next networking break. As always, the agenda includes longer networking breaks that allow attendees the time to have real conversations and see all of the capabilities within the expo hall. We know this time is valuable to our attendees…mostly because they tell us!

“Your relationships and trust in one another translates to the battlefield…and being here builds those relationships!”

That sentiment was shared by the last panel of the morning, which focused on “Prospects for a Central European Regional SOF Headquarters.” Our panel was highly qualified to speak on this topic, including:

“It’s not about a line on a map, it’s more about nations working together collaboratively,” said Major General Sándor, as the panel discussed camaraderie and potential for the future. Main topics of discussion included a regional Special Operations Command based in Hungary, as well as potential for an intel fusion center.

We at the Foundation are certainly excited to see what the future holds!

Food for Thought (and to Eat!)

Our first full luncheon of the Symposium was a smashing success…the conversations were flowing and we must say, the food at the Warsaw Marriott (and really, all around Poland) was delicious! While the last panel brought in senior SOF leaders, the first session after lunch brought in members of academia to discuss “Applied Innovation in SOF Units.” Moderated by Dr. Leo Blanken from the Naval Postgraduate School and University of Texas, this panel became the hot topic of conversation for the day.

The real crowning moment of the panel came during the Q&A. With the Moderator at the podium, a seat on the stage was unoccupied. That led an attendee to say in his question that he believed a Ukrainian should be occupying the empty seat to be part of the conversation.

The Ukrainian SOF Commander participated in the rest of the Q&A through his translator. “Sorry, I have been meaning to learn English, but we’ve been quite busy over in Ukraine…” he said to a room full of laughter. Proving for the first time that you don’t need to speak English to get laughs on the Global SOF stage!

After another coffee break in the expo hall, we were honored to have a big speaker on the docket–VADM Tim Szymanski, the Deputy Commander of USSOCOM. We gave our Master of Ceremonies a break for his introduction, as Mr. Jim Emmert of Global SOF Partner and Exhibitor JFD Global requested the honors. He was eager to make the introduction as he and the Vice Admiral go all the way back to BUD/S (Basic Underwater Demolition/ SEAL training)!

Lo and behold, the next “question” came from the Ukrainian SOF Commander who happened to be in the audience; he quickly said he was willing to fill the seat and walked up onto the stage to join the panel! This was a Global SOF first and not at all planned, but a very cool thing to see. 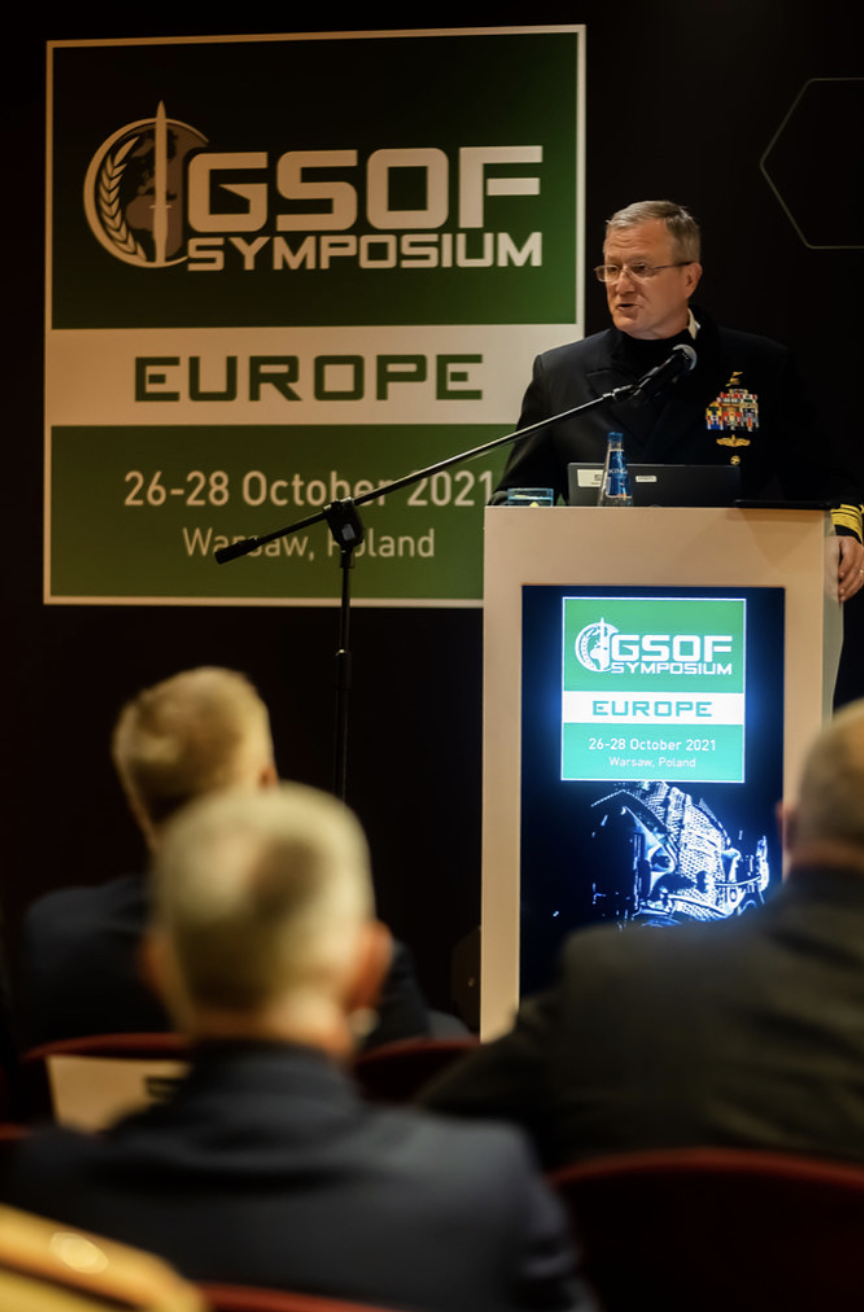 After VADM Szymanski left the stage, we had a bit of a change to the schedule. As anyone who works with high-level officials knows, this is pretty common, and unfortunately Poland’s Minister of Defense was no longer able to join us in person. However, he did send a letter in his stead, which was read to the crowd by Major General Slawomir Drumowicz, the Commander of POLSOCOM!

He gave a glowing and light-hearted intro for the Vice Admiral before he provided his keynote remarks. As a “proud Polish American,” VADM Szymanski was very excited to be with us in Warsaw. He spoke of the importance of our bonds and friendships across so many borders, and specifically lauded the “special relationship that we’ve had between Poland and SOCOM for more than 30 years.” 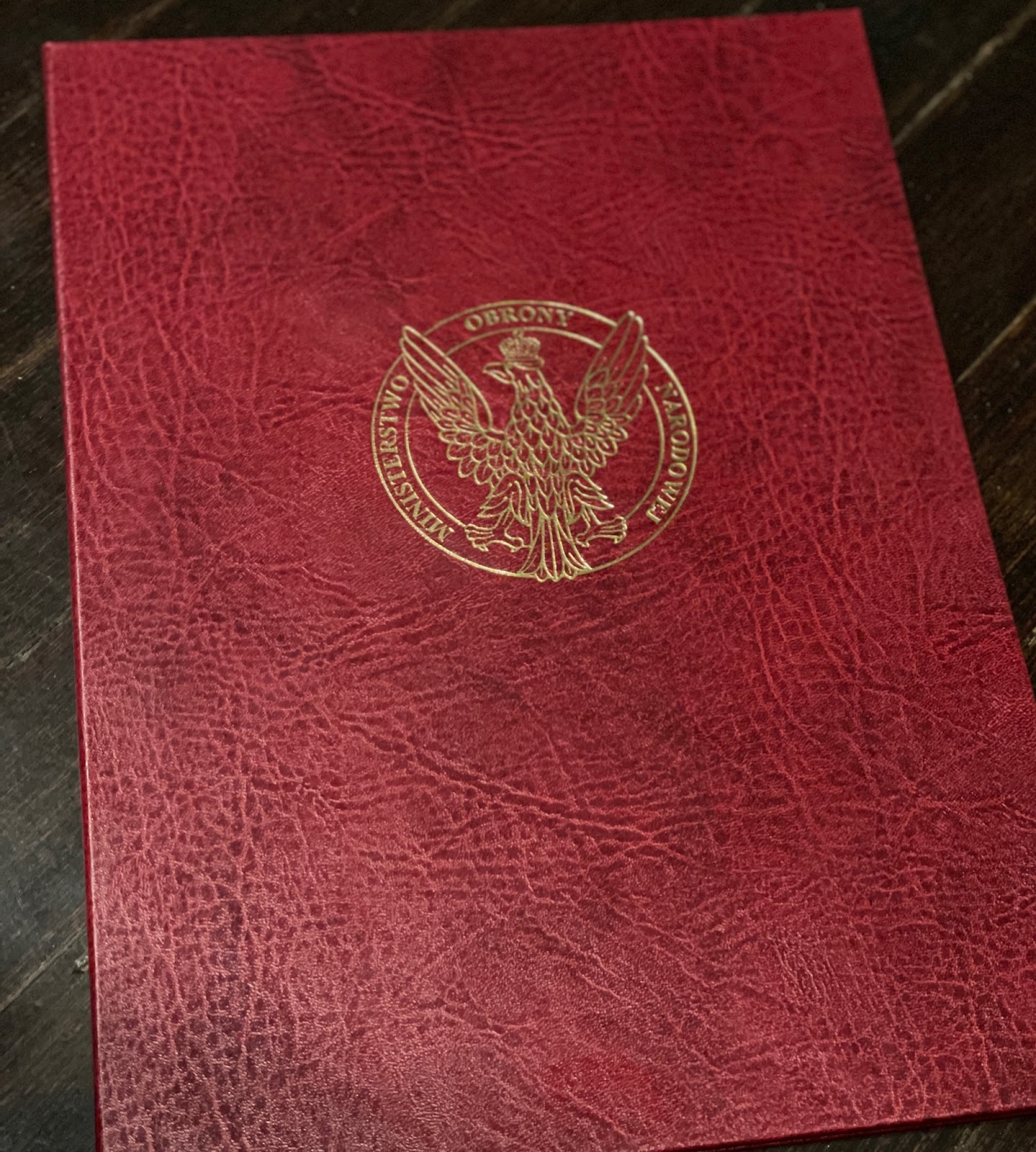 “The Global SOF Symposium is a unique event for exchanging knowledge and experience in an extremely important sphere on the development of the Special Forces and adjustment of its capabilities to the current security requirements of our countries,” he said, emphasizing he and his nation’s support of the event and the mission!

Our Bonds Are Strong Through…Song!

As anyone in the community will tell you, the time we spend together compounds our bonds, especially when there are unique shared experiences! Which is why we planned the rest of the day’s activities…

With the formal speaking events of the day complete, we invited all of our attendees back to the exhibit hall for a networking social, sponsored by our Partners at Allies, Inc and Textron Aviation.

The reception was kicked off with a toast from Major General Drumowicz–a simple but effective, “To us!”

With over 400 people in attendance, there was no shortage of people to meet, technology to see, or wine to drink! Even those exhibitors who had issues with getting their wares through customs still managed to showcase their capabilities somehow; whether through locally printed brochures or evocative videos that became the talk of the evening (we’re looking at you, TacMed Solutions).

But this wasn’t the end of the evening– there was still one more event to go. And it was Karaoke.

Some attendees were confused by this turn of events, but we feel a need to explain the Foundation’s Karaoke lore. It started at our first European Symposium in Lithuania, where the final event of the week ended at a venue called Club Mojo.

At our second European Symposium in Romania, we discovered that they too had a local watering hole called Mojo…and that place had some of the best Karaoke we’ve ever experienced. From there, the tradition was set, and we found Karaoke spots in both Spain and Belgium to celebrate the conclusions of our third and fourth European Symposiums.

So for turn number five, it became official: a Karaoke Reception was sponsored by Chainalysis and on the agenda! While we know it’s not for everyone, the folks who did attend and join in on the singing created some bonds and memories that won’t soon be forgotten!

So in the famed words of the Beatles…”Na na na na… Hey Jude!”

We have just one more day of the Symposium to go…and look forward to seeing everyone tomorrow at the Warsaw Marriott! Check out the Agenda to plan your day, and good night!