This is Blog #3 in our series about the Special Air Warfare Symposium in Ft. Walton Beach, Florida. See all of the blogs in this series here.

It’s HERE! It feels like we’ve already had two weeks worth of events, but Wednesday marked the actual start of our Symposium general sessions.

Our team assembled bright and early, although the weather was a bit foggy so it was more like “gloom and early.” But we got some coffee, asked the sun to kindly help burn off the fog, and got to work!

Being the MOST Interactive in the Expo

Freshly badged and ready to jump into some networking, attendees started their day in the Expo Hall.

It has 30 elite exhibitors, with capabilities ranging from a combat rubber raiding craft to intel and surveillance tools to, of course, aircraft! You can see the full list of our awesome exhibitors here. The exhibit hall also has extra allure because it’s where we keep the coffee, and everyone knows that’s a can’t-miss stop in the morning (huge thank you to Phoenix Global Support for sponsoring the magic brown elixir this week)!

The morning was also brightened by a delicious assortment of breakfast pastries, courtesy of our partners at Hypori, so a huge thanks to them as well! Some of us may have asked for one pastry and accidentally received one of each and then ate them all… and still had no regrets, because they were that tasty!

But besides the essential nourishment, the biggest thing happening in the Expo is, of course, the networking. 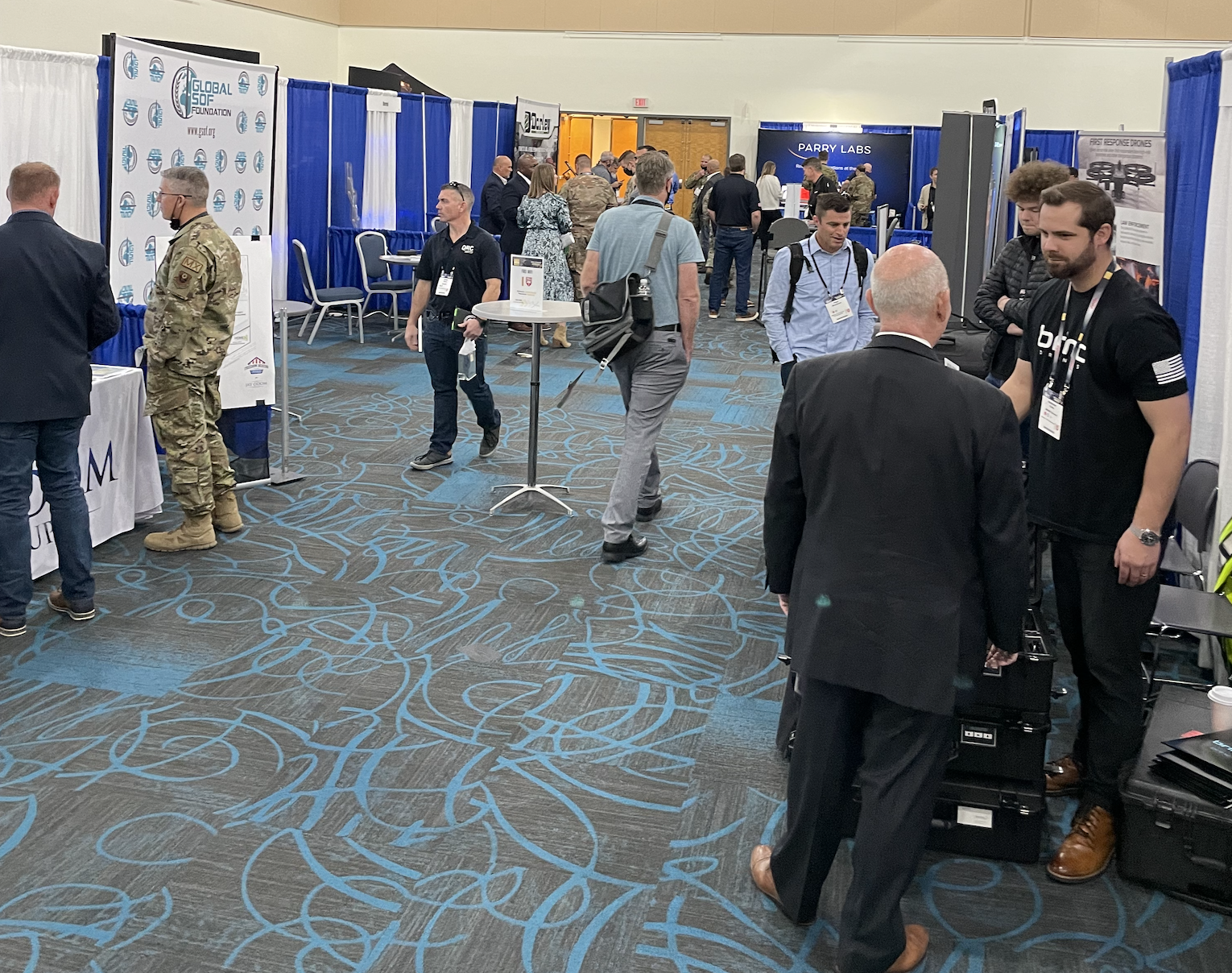 As one first-time Global SOF Exhibitor told us, “of all the conferences I go to, you guys are the most interactive with your exhibitors.” We build so much time and programming into the Expo because we know it really is mutually beneficial for everyone to get those conversations between industry and government started.

And based on the feedback we’ve been getting from our attendees so far, that interaction is paying off and helping get quality tech into the hands of our operators!

Next door, in Ballroom 1, it was time to kick off the first Symposium sessions. If you don’t know, one of the biggest jobs at these types of events is the Master of Ceremonies.

It’s a tough but important job… this person has to give out key information, facilitate transitions between speakers, figure out how to stall for time, or sometimes how to speed things up… and between it all sometimes try to get a laugh out of the crowd!

We have been really lucky over the years and had some great folks step into the role, from Bobby Boucher at The Hayes Group to Jimmy Mott from Leidos, but we like to “share the love” and let other members of our community have the MC honors.

Matt Caruso is a member of our Advisory Council who served 33 years in the Air Force and Retired as a Chief Master Sergeant in 2019. He’s also the Vice President of Business Development and Growth at Rivera Group and a member of the Board of Directors of the Air Commando Association. He’s spent a good portion of his career in the Ft. Walton Beach area, and he was an obvious and excellent choice to MC this week. Luckily–he accepted the challenge and has done an amazing job keeping the program moving!

Our first Keynote of the Symposium was Lt. Gen. Jim Slife, Commander of U.S. AFSOC, the local SOF Component Command–obviously very apropos for the theme of the week.

Lt. Gen. Slife talked about the transformation of AFSOC since 9/11, and the fact that the command is now at another inflection point and must be resourceful. “We have the ingredients for dinner by and large…we just have to figure out new menus.”

He talked about a number of his focus areas for the Command, including campaigning in the “gray zone,” efficiently disrupting VEOs, and retaining focus on the specific tasks assigned to USSOCOM. Lt. Gen. Slife was very excited about this event, and its growth potential for the future. And so are we!

Our next speaker joined us from the other side of the world–LTG (Ret) In-Bum Chun, former commander of SOF forces for the Republic of Korea. He spoke about the relationship between Korea and China, and the many lessons learned about their culture and practices over the centuries. “According to the Chinese today, the United States is overly focused on avoiding civilian casualties…and they see this is a weakness. China thinks they can beat us because of this.”

He also spoke about the “cyber superpower” that is North Korea, its “friendship” with China, ideas on how to turn the North Koreans against The Chinese in the future. Specifically, he suggested formimg an alliance among Republic of Korea, Japan, and U.S., making denucularization an end state and not a pre condition of negotiations with North Korea, and then normalizing relations with North Korea so as to “poison them with Coca-Cola, McDonald’s, and K-Pop!” 😉

Two very interesting speakers to kick off the day, and both true experts in their fields!

After a quick networking break in the Expo, we had our first panel of the day– “The Value of SOF Airpower in the Future Operating Environment.” It was moderated by Lt Gen (Ret.) Tom Trask (who is also the Chair of our Advisory Council), Col. Jocelyn Schermerhorn, the Commander of 1st Special Operations Wing, and COL Kevin Trujillo, the Commander of 7th Special Forces Group.

They had a really interesting discussion, focused on what issues they are seeing on deployments to different regions, divestment from capabilities that are no longer useful, and the need to better leverage our partnerships. (Hey, these concepts all sound pretty familiar #We’veBeenSayingThisForYears!) 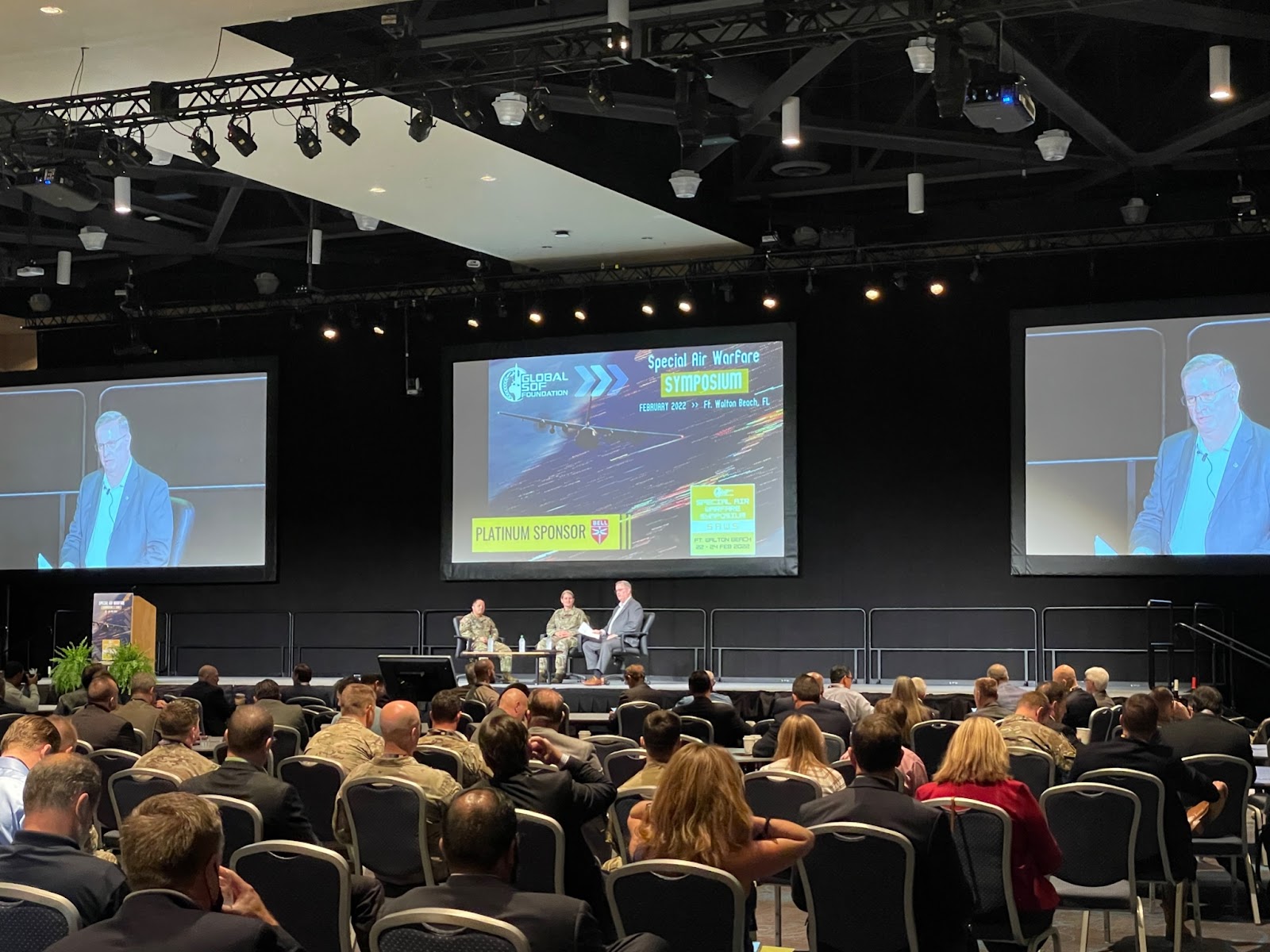 We rounded out the morning sessions with a great talk from friend-of-the-Foundation, Dr. Seth Jones! We love having Seth speak… the only problem is that he’s TOO accomplished and his title takes forever…he’s the Senior Vice President AND Harold Brown Chair AND Director of the International Security Program at the Center for Strategic and International Studies. He’s also an accomplished author, and he’s just released a new book that we highly recommend: “Three Dangerous Men: Russia, China, Iran and the Rise of Irregular Warfare.”

Seth gave a great talk about his book… and you know it was good because he SOLD OUT of all 50 of the books we brought for his book signing afterwards. If you missed out, you can buy his book online here.

We also just released an episode of our podcast with Seth focused on the book, which you can listen to wherever you get your podcasts– it’s SOFspot, Episode #60!

We Got Our First Choppah!

For many members of our community, helicopters are just a way of life. However, this event marked the FIRST TIME we actually had one come and land at one of our Symposiums! Air Center Helicopters, Inc (ACHI), a long time Corporate Partner of ours, flew in one of their birds as soon as the fog lifted. 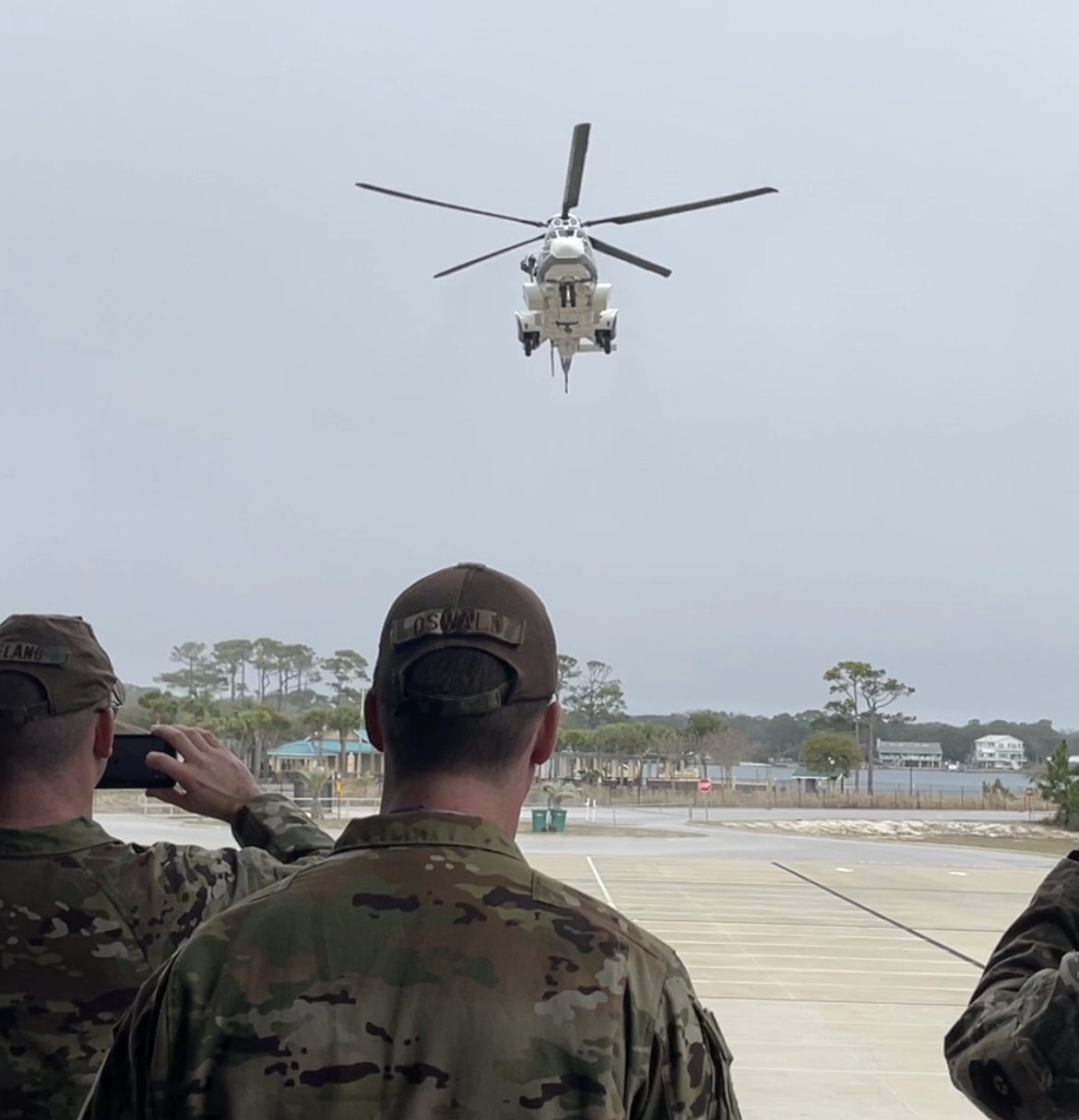 ACHI operates a variety of aircraft, but the flagship of their fleet is the Airbus H225 Super Puma. The H225 is a “next generation modernized medium lift helicopter” capable of performing a number of different missions, including:

During the lunch break, folks had the opportunity to come out and see the helicopter up close. It was a very hands-on way to showcase their capabilities to the community.

They also won big bonus points because they got to take the SOF Commander for the Slovak Republic and the Sergeant Major for Slovak Armed Forces for a spin (plus some of the ladies of the Foundation, which we were very happy and thankful for)!

We had two other more unique capability demos throughout the day. All day long, ComTech Systems showcased their satellite communications system called The Recon in the front of the building (and also inside, and also 20 miles away…all connected). Through it, they provided internet services to their troposcatter system called The Comet to all of the locations–pretty cool!

And in the evening at the networking reception, Privoro had a demo to show how they help government agencies utilize commercial off-the-shelf (COTS) smartphones without feeding critical information to adversaries. SafeCase, as the first mobile device approved by the NTSWG for usage within secure spaces, is a critical enabler of compliance with policies like NNSA’s ACD 470.6 and CNSS Directive No. 510.

All in all, really great demos, plus we have one more coming from BRINC Drones on Thursday…

We had two more informative sessions post-networking-helicopter-viewing-book-signing-lunch. The first was a panel on emerging technologies with a great line-up of speakers that includes innovators, writers, and even an astronaut!:

They talked about how hybrid warfare in the grey zone is now the norm, the possibilities of AI and machine learning, and how the speed at which we can integrate technology is actually more important than the tech itself. They were followed by our final keynote of the day–BG Branislav Benka, SOF Commander of the Slovak Republic, and the Command Sergeant Major of all Slovak Armed Forces.

With events like this, schedules are subject to change. That was true before COVID, especially with a lot of these high level speakers, but with COVID and now the situation in Ukraine….. We all know that flexibility is a life requirement.

Our previously planned keynote speaker, General Daniel Zmeko, the Chief of Defense for the Slovak Republic, was not able to attend and had to stay in DC due to the volatile situation going on near his borders.

However, he generously sent us his number one man for the SOF Community, BG Benka! BG Benka is a graduate of the Slovak Military Academy within the Military Intelligence and Reconnaissance field of study. He also holds a Bachelor Degree of Law and he is a graduate from the Defense Language Institute, San Antonio, Texas where he studied English. Benka’s assignments have included a full range of duties in 5th SFR starting as a Team Leader continuing as a Company Commander, then Chief of the Training Department and finishing as 5th SFR Chief of Staff. He has served in the Slovak Republic Training Center, with the Slovak Chief of Defense, or CHOD, and ISAF SOF.

He and the SGM spoke and took audience questions, and when they left they even gave Stu a cool plaque! It was great to have them join us. Speaking of cool plaques, we wrapped up the afternoon with a presentation to our Corporate Partners, without whom NONE of this would be possible.

Last year we hit a huge milestone of 100 Corporate Partners, so we gifted all 100 of them with a commemorative shield! However, we haven’t seen all of them in the past year, so this gave us the opportunity to catch up. Plus, since that time we’ve gained another 18 Partners, so all of those who were in attendance received their New Partner shields, as well.

After the presentation, we all headed into the exhibit hall for our Networking Reception, sponsored by NetAbstraction and Privoro, with a bonus Featured Cocktail sponsored by MAG Aerospace… the MAG-arita.

We had a great time and really appreciated everyone who joined in… one more day to go! Check out the agenda for the last day, here: